﻿ One Man And His Droid (Mastertronic) Review | Sinclair User - Everygamegoing 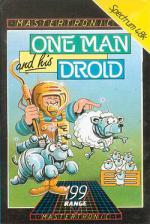 One Man And His Droid

It is good to know that in centuries to come the age-old skills of the shepherd with his faithful hound will still be of service to mankind. Mastertronic seems to think so, anyway, and One Man and his Droid is the result.

You have to capture ramboids, 4 a male form of alien sheep' - ho, ho - and herd them into a teleport device with your droid. Why is not so clear. Never mind. The game falls into two parts, and it's really a maze game with plenty of strategic elements.

The first part involves making your way through hundreds of these metallic beasts to find an exit at the top of the screen. Mastertronic might as well have left that part out, since it's a bit of a chore and nothing like as much fun as the main game.

The second part shows a network of tunnels, in which roam eight different types of ramboid. A display shows the order in which they must be herded into the teleport - you must get four in the right order to progress to the next level.

The droid can fly, dig a hole to let ramboids pass over it, or just slay on the ground. There's a time limit which is generous but rapidly deteriorates for later levels if you don't move fast early on.

The graphics are much better than your average Mastertronic game, chunky and vaguely reminiscent of Boulder Dash. Indeed, the whole production is good, and represents excellent value for money at the budget price range.

Herding the ramboids is more a matter of organising their natural movement than just pushing and shoving - you'll have to work out the rules by which they move and then provide judicious obstacles to guide them into the teleport. At later levels that becomes more difficult, as lumps of masonry buzz about the corridors and get in the way.

Each level has a password, and once you've discovered it you can start play at that stage, which is a boon when each game takes at least 20 minutes to play - the initial time limit.

Mastertronic has dumped some pretty revolting stuff on the public in the past. One Man and His Droid is challenging, fun, and cleanly presented - budget software seems to be growing up.

One Man And His Droid

Challenging, fun, and cleanly presented - budget software seems to be growing up.