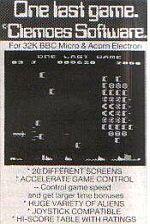 Software firms are becoming rather sly these days when it comes to naming their products, and One Last Game, from Bevan Technology, is no exception. "When your games are all played out, it's time for One Last Game", says the blurb on the cassette insert. Nice one.

However although the title may be original the game isn't. Basically,it's a reworking of that old favourite Galaxians.

For those unfamiliar with it, this was the one where a phalanx of aliens trudges back and forth across the top of the screen, breaking off in ones and twos to float down and attack your laser base, while you try to shoot them down.

Bevan Technology haven't done a bad job of re-workingit. For starters, they've changed the axis of the game so that the aliens appear on the right of the screen and your laser base floats along on the left.

Also they've added a scrolling landscape which, although not the smoothest I've ever seen, does give the impression that you're belting along at a fair rate of knots.

In fact the game has all the extras you could want: nice colour and good sound which can be switched off if not wanted, freeze frame in case the phone goes just when you're about to beat your previous best, and 20 different levels ranging from could-do-it-with-my-eyes shut to downright-suicidal.

In a nutshell, this is quite a reasonable game on the Galaxians line, but thereby hangs the rub. Do we really need yet another version?

If that's what you're looking for, all well and good. This is quite well put together. But for originality, nought out of ten.

This is quite well put together but for originality, nought out of ten.