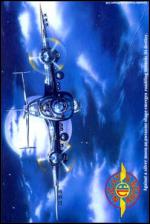 Night Raider strikes a nice balance between simulation and arcade play whilst at the same time teaching you something useful about one of the most exciting sea battles in the history of naval warfare.

The Bismark was the pride of the German fleet in World War II and the scourge of the Royal Navy. She claimed amongst many ships the Battle cruiser Hood - before being sunk by a prolonged aerial attack from planes launched from the Ark Royal.

Night Raider lets you take the joystick of one of these planes as it weathers the flak and dive bombs the Bismarck to drop its torpedo.

The game has a multi-screen design - enabling you to flick from front view to tail view, cockpit controls, scrolling map of the battle theatre, and also the menu and gameplay options by pressing the number keys on your computer.

Your plane is based on the Grumman Avenger - an American designed torpedo bomber which delivered the killing death blows to the Bismarck. The game is at its best in the mission mode when the Avenger comes under attack from German fighters. It is a case of blasting away with your forward and aft guns - flicking through the screens whilst also keeping an eye on your course.

The Avenger has several controls on board which you can operate with the aid of an icon pointer which you move around the controls with your joystick. These are airspeed, altitude, artificial horizon - of particular use when flying at night, vertical speed, inverted T-bar to show the position of the rudder, brake, throttle, ignition, and torpedo.

Armaments are just the torpedo and forward and tail guns. You can only load one torpedo into the Avenger so you must hit the target when you get in range.

The various controls of the Avenger sound similar to those you would expect in any flight simulation. In practice, they are much easier to use than a pure simulation. The tolerance levels have been set low - so that you have a fair amount of time to put things right should you take too much flak, or overheat the engine.

Night Raider makes a justifiable claim to having a challenging strategy element. I particularly liked the mission challenges. A Commander offers a fist full of straws. Yep - you guessed it, they are pretty tough challenges, and you always draw a short straw of some description.

The scrolling map is full of enemy hazards. There are closing German fighters, U-boats, destroyers, floating mines and many other hazards. Sometimes you have two tasks to carry out at the same time - like destroying the Bismarck and defending the Hood.

Essential skills, apart from the obvious ones of mastering the flight controls and perfecting aim with the torpedo you must also learn to set the course, navigate, and manoeuvre the Avenger.

There is a real knack to this - particularly when in combat. The crosshairs lock the plane into a certain course. You must therefore take the crosshairs off the screen risking attack from enemy fighters. Then quickly flick to the map screen and get your Avenger pointing in the correct direction. It is not easy but it is challenging and rewarding when you successfully correct your course and get your guns operational quickly enough to take out some incoming fighters.

The graphics are worthy of mention both on the Plus 3 and Atari ST - the two versions tested. They are solid filled on the ST but resort to 3D line drawings on the Plus 3.

Nice frills are included like a picture of Adolf Hitler with digitised speech as the Fuhrer celebrates the first victim of the Bismarck. Soon after Winston Churchill is up on screen making his famous speech about lifting the curse of Hitler "from the brow of Men".

Of course these frills are reserved for 16 bit owners - but the main gameplay graphics are also sound on all systems. Best of all are the German fighters - if you bag one of these they plunge most dramatically sea-words with trails of flames pouring from their tails.

Gamers old enough to remember the Dam Busters (recently out on budget) will see some unmistakable resemblances in game design.

This is the best launch from Gremlin for some time. I found it a thoroughly enjoyable game to play. Just right for people who want something a little more challenging but don't want to plough through a thirty page manual - and get involved in save game options as for example in something like Carrier Command. Night Raider finds the middle ground most effectively.

A thoroughly enjoyable game to play.