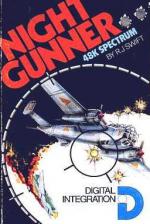 Before going on to this new game from Digital Integration, we must first put something right from last month's review of their simulation, Fighter Pilot. One reviewer noted: 'Key control is a fraction slow, you have to keep a key pressed for results...'

Dave Marshall of Digital Integration demonstrated to us that this remark was a little unfair. The reason being that the control keys were designed to simulate an aircraft's performance. In fact the control in Fighter Pilot is proportional, i.e. the longer you keep a key pressed the more effect it has, moving, for instance, from a slow to a very fast bank or turn. So we were a little wrong to criticise this.

Night Gunner is a massive program, one which the inlay is at pains to point out is more of a game than a simulation, and which is based on a Second World War scenario. You are the gunner and bomb aimer whose aim is a good one - defend your plane against enemy attacks and destroy the ground targets in 30 different missions. Each mission comes in two parts, firstly the flight to the target, and then the actual bombing run. In the first part you get a cockpit view with your gun sights in front of you. Three types of target appear, barrage balloons, enemy fighter planes, and very large bombers which cross your flight path occasionally. Points are received for hitting any of these. The attacking fighter planes fly at you with their cannons blazing. Below the display area, the Captain reports time to target with a countdown figure. There is also a visual display of how many shells you have and a small aircraft shape for damage reports. A flashing indicator also tells you when you have been hit and the status symbol changes colour in areas accordingly.

Flight deck damage will result in random movement of the plane during ground attack missions - if it's destroyed you crash. If enough engines are destroyed before a bombing run, then the bombs will be automatically dropped, and if 3 or more engines go then you will crash (seems reasonable). Wings and tailplane may suffer damage without affecting performance, but if destroyed they will crash the plane. And if the gun turret is damaged it slows down your gun traverse, and if destroyed means that you can still fire but not aim.

The ground attack missions are all different and alternate between high level bombing and low level rocket attacks. You have a limited number of bombs and rockets and the mission is terminated when the ammo is all used up. High level runs start off with static planes on the ground and the direction control will move the plane and therefore the sight as you pass over them. Another variation is moving tanks where deflection bombing techniques must be used to take into account the movement of the target. Low level runs are even more fraught. You are given a maximum height of 400 feet and must then dive to fire the rockets without crashing into the ground. During these low level attacks flak is being fired at you, so you must weave the plane about to avoid it. Again, the 'HIT' indicator tells you when damage is occurring.

The producers say that Night Gunner's concept is based upon the Avro Lancaster four engined bomber although it is not intended as a simulation. Between missions there is a screen showing a very large graphic of the bomber crossing a city skyline and dropping bombs which turn into the letters, MISSION 1, or whatever mission you are about to play.

'What a fabulous program. First impressions are that it's like Zzoom, but just much more so. The 3D effect of the attacking fighter planes in your cockpit view is marvellous. They come from little specks in the far distance right up, dodging, weaving, firing and finally dashing overhead, or just under your wing tips. Shooting them is a skilful task as you must use 'deflection' shooting to fire at the point where they will be by the time your shells reach them. The barrage balloons are tempting targets as they are big, but they're red herrings really as they take your mind off shooting down planes and thus saving yourself from damage. Marvellous graphics, very smooth and real 3D in effect - oh, and the sound's great too.'

'With 30 missions to get through, I'm going to be playing this one for a long time. So far skill level 1 (there are four) has proven to be too difficult after mission six, because each mission gets harder as well. If you've ever seen an old war movie with aerial dog fight sequences (the real ones) then you'll get some idea of what the cockpit view looks like when you're flying to the target. I would say that this game transcends addictivity.'

'The detail in Night Gunner is excellent. Even the effect of firing your cannons is accurately represented. If you fire and then move the sights, you can see the bullets converging outside the centre of the sight, or at the position where the sight was when you first fired. Low level rocket attacks are the very devil. Trying to dive without crashing, line up a ground target in the sights, avoid the flak and then gain height for the next dive takes all the concentration you've got. This is the first time I have seen a simulation turn into an arcade game - and it works!'

This is the first time I have seen a simulation turn into an arcade game - and it works!