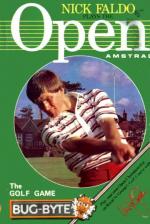 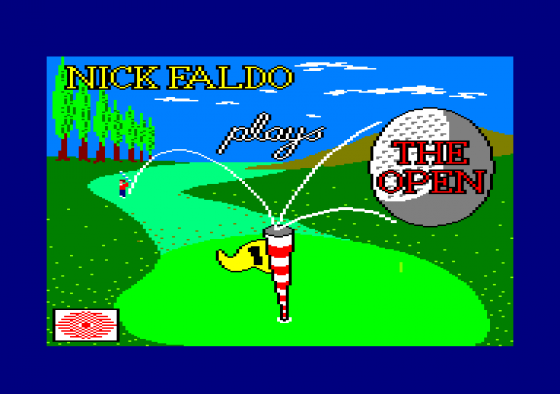 The Open in question is the one at Royal St. Georges last year - pity they didn't get Sandy Lyle to put his name to the game because he won it. The course is recreated in glorious Amstrad pixels with all its hazards and holes intact - you'll need to go to Sandwich to check out the real thing though.

The game is icon-driven through a box at the bottom of the screen with the top two thirds of the display being devoted to the course. This shows the area around the ball and using a map icon it can be zoomed out to reveal the whole of the hole you are currently playing.

The course can be played in four different ways: a full round, holes 1-9, holes 10-18 and individual holes at a time. The par is 70 but it will take plenty of practice at each hole before you'll get close to that because it is even easier than the real thing to make a complete mess of a hole. Once you've learnt the basics though a reason-able total (under 90) should be possible.

After viewing each hole the player has woods, 3, S, 7 and 9 irons, wedge and putter. Common sense will mostly tell you what Club to use at first but finding out the particular distance achieved by each from different lies is a matter of practice.

The shot direction indicator has to be set next in the bottom left of the box and can to make a number of important decisions about the shot he's going to play. In the top left of the icon box is a club selector which gives you the choice of driver, 3 and 5 be anywhere in a 360 degree circle. When choosing this the wind direction and strength also needs to be taken into consideration as this will affect the flight of the ball. The last parameter to be set is the strength of the shot and again the best setting of this for a situation can only be discovered by trial and error.

Having set everything up you activate the golfball icon to play the shot. If the computer disagrees with your choice of club it will ask "Sure?" and you can change your selection if you want to. When the shot is actually played the golfer in the icon box will swing, the speed depending on the force of the shot, and hit the ball of the right hand edge of the screen.

The display now switches completely to an overhead view of the ball as it flies through the air, the map scrolling under-neath it. It gets bigger as its height increases and then falls away again. The process now repeats until you get the ball into the hole and move onto the next one. The putting process is the same as for the other shots.

The course has the usual hazards of rough, bunkers, water, out of bounds, sea, road and pathways, all of which will produce a different result from a shot when hit.

It is certainly the best golf game I've seen and is very playable. The course graphics and the way the shots are played is very nice and it will present plenty of challenge as you try to hit par. Golf is still something of a minority sport though in computer terms.

Golf strikes me as one of those games that really doesn't belong on a computer. I mean, this one's streets ahead of any other golf game, but it's still just dull and clumsy on the little screen. Where's the thrill of the long drive, the skill of the putt? Where's the 19th hole?

It's a golf game, so it has a green screen anyway.

Very nicely presented with lots of detail on the course. 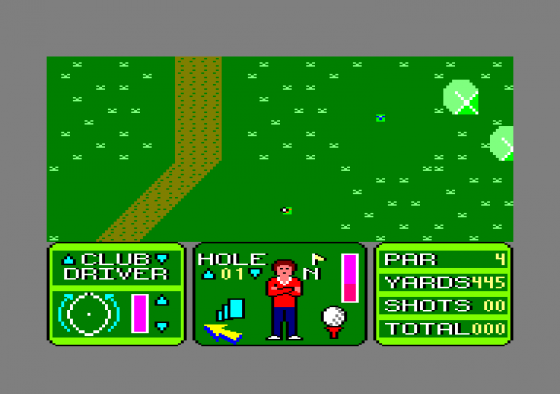