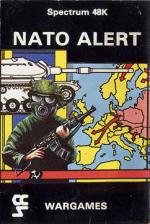 I had an uncanny sense of déjà vu looking at this game. I thought I'd seen it all before, and indeed I had I'd seen a copy of this when Norman Smith was hawking it around last autumn under the title of Empire Wars. The original title is in fact more appropriate, because this is a simulation of NON-nuclear conflict in Europe that could apply to virtually any time, although it is set in the present day.

Europe is divided into two blocs with the various neutral countries allying themselves with either one bloc or the other. Although this may sound a bit too convenient to be realistic, the evidence of both World Wars is that most neutral countries do fall by the wayside, either through compliance or force. The European continent is divided up into 33 countries and 12 sea zones (the USSR being treated as 3 'countries') which are shown on a map which occupies about two thirds of the screen. You set the objective at the beginning of the game, by deciding the number of countries you intend to occupy (from 1 to 21) and also the difficulty level (1 to 5). You are given a one or two player option. It's relatively easy to beat the computer at level one, but on level five it's extremely extremely difficult - I managed to hold out on level five for over an hour, but I've come nowhere near winning on anything over level three.

As you can probably imagine this game can take quite a while to play, so there 's a Save Game option included, which is handy. Anyway onto the mechanics of the game: the Soviet player always starts first (if you're playing a one-player game, the computer always takes the Soviet side) which tends to offset the immediate territorial imbalance - they typically seem to grab four or five weaker countries, such as Greece and Finland, on the first go. The Soviet ships will also start attacking and conveying moves.

As each of your countries/sea zones is attacked, you are shown a strength chart, which also indicates casualties on both sides, for armies, fleets, air divisions and factories. When the attacker has a two to one majority in military strength, he occupies the country. Once it is your turn you are taken through each of your countries in turn, and have to select a course of action for each. You move your armies, fleets or aircraft to adjacent countries/zones (aircraft can move two zones) or you can attack enemy countries which are in range (ie adjacent for armies and fleets, two zones away for aircraft). Aircraft can knock out two armies; but though each army is deemed to be equal in strength, attacking armies will come off worse than defending ones unless there is an overwhelming number of them (I think the ratio is two to one).

After making your move, you have to decide what to do with the country's resources - each country has an output level, which is determined by the number of factories it has. You have to use the output points to build up more weapons (armies, factories, ships) or more factories. Each factory has an output of four points; and an army costs one point, aircraft three, ships two and a factory four. This adds a remarkable amount of strategy juggling - you can only build one type of unit per country per go, so for example at the start of the game when each country only has one factory it is very inefficient to build aircraft - but that is precisely the time when you need them to knock out enemy factories and contain their armies' numerical superiority. Also do you knock out the enemy's production capacity, or try to capture it intact, so that you can build with it yourself.

Each country is allowed a maximum of five factories and obviously, one tends to concentrate production in better protected countries, such as Ireland and Portugal so as not to lose the factories to the enemy. A very clear picture of the problems associated with lengthy supply lines and military movement emerges, and helps to reinforce the atmosphere of the game.

NATO Alert is a strategy game concerned with the general scope of warfare, and the logistics of lengthy campaigns. In this respect it s very good but it lacks realism in some important aspects: no account is taken of chance events, such as the weather (which has defeated all previous attempts to defeat Russia, for instance) and geographical distances are rendered meaningless by the fact you move from capital to capital. Some of the game's responses are very, very slow, such as when you are moving the cursor to where you wish to attack, which seems to take about ten seconds per square.

And it would have been nice to have had more flexibility over the Empire's centres, as in Apocalypse. Perhaps the release of an extra scenario tape would solve this problem - it's a bit theoretical, but very challenging. CCS's games are definitely improving.

Although Cases' games are improving, some of Nato Alert's responses are very, very slow... When you are moving the cursor to where you wish to attack, it seems to take about ten seconds per square.