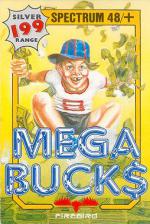 Megabucks places you, as heir to your uncle's fortune, outside a huge mansion which is full of security systems and all sorts of advanced traps. Your mission is to find a way into the mansion and get hold of a hidden item which will entitle you to the cash that he left behind.

Sounds familiar? What we have here is yet another attempt at the arcade-adventure theme twiddled and tweaked to incorporate lots of menus and large-ish graphics.

Into the heady excitement of the game then, and we find ourselves standing on the first of an endless array of composite landscapes with an occasional object lying on the floor, just daring you to attempt to pick it up - thus loosing yourself in a maze of black boxes offering many object- manipulative options.

Everything is icon-controlled (hence all the boxes etc) and therefore you will have to get pretty darned efficient at selecting those icons in order to get anywhere before the time limit runs out or something else happens to end your game. You walk left and right in an extraordinarily predictable manner picking up objects, fighting your way through black boxes and suchlike.

Most of the locations are rooms in the mansion and are generally interesting to look at - being quite detailed and colourful. The objects are pretty hard to miss, and are - to be fair - quite well drawn. By using the wretched menu system it is impossible to examine the objects and discover their use.

The Gem is a particularly good thing to get hold of, allowing you to fly around and thus reach locations previously hidden.

Well, there's not a great deal more to say about Megabucks. It's sort of OK, but is so flabbergastingly unoriginal that it's budget price is just about all it has in its favour.

Dreary, old-hat nonsense pretending to be a bargain purchase. Don't be taken in - it's flabbergastingly unoriginal!

Dreary, old-hat nonsense pretending to be a bargain purchase. Don't be taken in - it's flabbergastingly unoriginal!