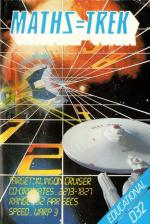 The current educational term for judging computer software is "degree of interaction", meaning basically that the program has to involve the child in a reflective exercise.

This one comes from one of the centres of Dragon software retailing. Nice to see they're willing to put their own heads on the block!

Maths-Trek is well-packaged and presents its contents well, initially with a short inlay and then in more detail on screen.

The player is taken through a simplified version of Star-Trek in high-res screens, with the object of getting to a star base for refuelling. Along the way, difficulties are encountered: asteroids, Klingons, black holes, and fuel shortages.

There are deal with by solving the maths problems posed by the computer. Normal progress is made by answering questions pre-set according to difficulty and type.

The nine year olds I tried this on loved it. They enjoyed the novelty of a "game" at their own level, with interesting graphics to motivate them.

At each starbase the player has to the opportunity of increasing the level of difficulty. One difficulty at the start seemed to be the fuel running out too soon.

Good at home or in the classroom, but unfortunately a solitary trek.

Good at home or in the classroom, but unfortunately a solitary trek.
Logout