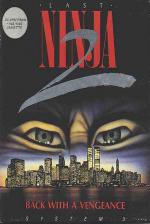 Just who are these people who say there's nothing more you can do with the Spectrum? Panda pooh. The Last Ninja 2 is as good a game as I've seen on any computer, and all the colours and sampled sound effects in the world wouldn't alter the fact that the Spectrum version is wonderfully playable and looks fab.

Last Ninja 2, you say? What happened to Last Ninja 1? Apparently, it was a bit of a bish and System 3 wisely decided not to market the Spectrum version, though it was a hit on the Commodore 64. There's a chance that LN1 will appear on the Spectrum now that they've sorted out the problems.

LN1 was a fighting/strategy game set in ancient Japan, in which Mr Ninja took on the evil warlord Kunitoki. Last Ninja 2 looks very much the same, with a large playing area in the top left of the screen, and displays of your current weapon or object, timer, score and fighting strength. There's a choice of joystick control modes - normal, directional, and so on - so you can choose the one with which you feel most comfortable. Options include a variety of fighting moves such as punches, kicks, ducks and leaps, and you can also pick up and use objects, selecting the current object with the keyboard.

What's changed is the setting; instead of ancient Japan, you are now plonked in the rough-and-tumble of modern New York, transported through time to take out the evil Kunitoki, well-known ninja-slaughterer and stealer of Orbs of Power.

The first thing you'll notice is that the backgrounds and characters are fantastically detailed and realistic. You start off in Central Park, complete with bandstand, park benches, fences, trees, paths, lakes, streams; it's all there. It's a multi-load game, with 16 or 17 screens for each of the five loads, so that's lots of screens.

Your ninja character is excellently animated, and because all the graphics are monochrome there's no problem with colour clashes. The game combines fighting and puzzle-solving, so while it's good fun to kick senseless the guards, punks and corrupt cops who attack you on the way, a major element is working out how to find and use objects. How, for instance, do you kill the giant crocodile in the sewer? Could it be something to do with the bottle? Can a chicken really save you from a black panther? Where do you find extra food? And just how does that pole help you to cross a stream?

Your eventual aim is to find Kunitoki and reclaim the stolen Orb of Power. Since he has set himself up as overlord of a drugs empire, this involves you fighting your way through the park, the sleazy backstreets of NY, the sewers, a drugs factory, and Kunitoki's gothic headquarters. If you find the end point of each level - usually an obvious door or other exit - a menu comes up asking you if you want to load the next stage. Usually, but not always, any objects you find relate to a puzzle in the same stage. However, some relate to later levels, so before you move on, make sure you have found everything there is to be found.

Clear? Though there are no sound effects, this doesn't really detract from the game. There is a theme tune which plays in pause mode.

Last Ninja 2 is a massive game with massive packaging; a huge box, a 64-page novella/manual packed with juicy clues, and loads of ninja-style novelties. Considering the derivative dross some companies are churning out at £9.95, it's a bargain even at £12.99, because it will keep you playing for months. Even if you complete the game, you can play again trying to get a higher score - read our little boxes for some handy hints.

Programmer Mev Dinc, he of Gerry the Germ, Prodigy and Knightmare has done a superlative job. Gary Thornton's graphics are excellent, and even in 48K mode the music of Brian Marshall is catchy and entertaining. Buy this game or a big Japanese will poke you in the eye.