28th November 1984
Know Your Own Personality
By Mirrorsoft
•
Spectrum 48K 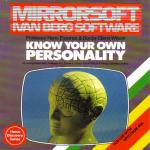 Know Your Own Personality

Professor Hans Eysenck is one of the gurus of modern psychology, renowned for outspoken and often controversial views on the nature of human thought.

His recent book of personality tests, published by Penguin, became a minor bestseller, and the tests have now been released in the form of a computer program.

It must be emphasised that the tests are not supposed to have any clinical value, but are simply an entertaining questionnaire of the type that appears in glossy magazines, but glorified by the authority of the good professor.

The questions include all the things that you might expect, such as 'Have you ever wished you were dead?' or 'Do you feel you are a failure?'. In amongst these depressing interrogations are more intriguing queries, such as 'Do you eat your meals faster than everybody else?' or 'Would you like to watch a pornographic movie?'

Each test comprises about 200 questions. There is a facility to SAVE the data from each completed test so as to produce a grand display of all your faults and virtues in one soul-destroying blitz.

Taken as entertainment, which is Mirrorsoft's purpose in releasing the program, Know Your Own Personality is good enough fun. One should not, however, believe everything the program says. Eysenck may be a leading authority, but even he cannot be expected to get it right with a silicon cushion between him and his patient.

Know Your Own Personality

Eysenck may be a leading authority, but even he cannot be expected to get it right with a silicon cushion between him and his patient.