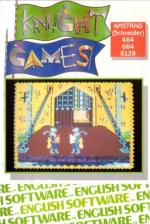 The medieval muckabout is a new concept in combat games, with knights battling to knock the rivets out of each other in eight contests of brute force and skill. There are six combat events here, where two knights go head to head and two shooting events - crossbow and archery.

The eight events all load separately but fortunately this doesn't take long and is handled by means of a convenient menu. The whole thing starts with a very impressive loading screen involving eight characters all doing their thing in superb animation. You can then load one of the eight events; with Swordfight 1, Quarterstaff, Archery, and Ball and Chain on the first side, and Swordfight 2, Pike Staff, Crossbow and Axeman on the other.

All the events take place against beautifully detailed backgrounds drawn with superb use of colour. The participants are delightfully animated using many separate frames of action and manoeuvre. Not only that, but the background music is varied, atmospheric and enjoyable. So if it looks so good and sounds so good why isn't it the Mastergame, you ask? The answer lies in the gameplay, which is very similar and repetitive in all the six combat events and isn't much better in the shooting contests.

The six combat events are basically just a matter of the two players, either both human or one computer, standing toe to toe and beating the pulp out of each other until time runs out or one of them gets knocked out. Time is measured by a burning candle, while the hits on the fighters are registered by disappearing roses and shields. Even short fights last a long time, so those with plenty of stamina will survive the longest.

The archery and crossbow contests require more skill, shots are aimed using a cursor, which tends to wobble about to make things difficult. These contests are also against the clock, sorry candle, and for all events the more hits you score the more points you get. The high score for each event is shown on a menu, and is carried over when you load a new event.

It's a shame there isn't more variety to the gameplay but the graphics, music and humour will keep you interested for a while - and beating the tar out of someone in a two player game can be most satisfying. Fun for a while but will soon lose your interest.

The events look amazing, and I'm afraid the gameplay is very dreary. Even hardened combat game freaks will feel disappointed. You'll load each of the events once just for the graphics and music, but I don't think you'll actually play any of them much.

Great graphics, but I'm not really that interested in beating the whatsit out of someone on a computer screen.

Beat the computer at the combat events.

Visibility's fine, but those colours really are worth seeing.

It's a shame there isn't more variety to the gameplay but the graphics, music and humour will keep you interested for a while.