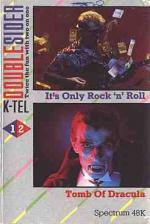 It's Only Rock 'n' Roll/The Tomb of Dracula

A NEWLY-RELEASED batch of double-sided tapes from K-Tel includes It's Only Rock and Roll, with Tomb of Dracula on side two.

It's Only Rock and Roll is a strategy game in which the object is to become a pop superstar by earning £1 million and collecting three status symbols.

Among the options are choosing a name for the group, planning tours, hiring managers and selecting songs. Time, money and energy are your resources and you lose the game if you run out of any of them.

The odds are stacked heavily against you and neither the songs which the computer offers for your approval, nor the occasional news flashes which are intended to enliven the game - "Government taxes pop groups" or "Tony Blackburn likes Sinclair Swingers", for example provide much of an incentive to continue playing.

A few graphics and more amusing responses might have improved this potentially appealing idea considerably.

Tomb of Dracula is a simple graphics adventure in which you attempt to find your way through a tomb haunted by ghouls and zombies and reach a staircase leading to Dracula's treasure. On your way, you must collect silver stakes with which to defend yourself and be careful to avoid the slime pit. You may find yourself repeatedly entering empty vaults and neither the story line nor the graphics is original enough to compensate.

Castle Coldltz, on another double tape, is a slightly more sophisticated adventure, in spite of the fact that it has no graphics.

The location is the notorious prison fortress, from which you are trying to escape while collecting as much Nazi loot as you can to take with you.

The scene changes quickly - from bath-house to trophy room to mortuary among others - and there is an interesting variety of treasures and messages to spur you. Full instructions are given at the start and if you make a map as you proceed, your quest should not prove too difficult.

The second side of the Castle Colditz tape offers Battle of the Toothpaste Tubes. It is a shoot-out game featuring a tube of toothpaste from which you fire at the evil brush brigade and the serried ranks of mini-tubes below.

You must beware of the chattering teeth but can protect yourself with your fluoride shield. If you hit the handle of a brush instead of the bristles, your toothpaste will rebound.

Apart from the novel scenario there is nothing particularly original about a simple arcade game which should only please anyone who is addicted to pressing the fire button.

It's Only Rock and Roll and Castle Colditz are available from K-Tel International, K-Tel Houses 620 Western Avenue, London W3 0TU. The cost is £6.95 per double-sided tape.

It's Only Rock 'n' Roll/The Tomb of Dracula

Apart from the novel scenario, there is nothing particularly original about a simple arcade game which should only please anyone who is addicted to pressing the fire button.
Logout