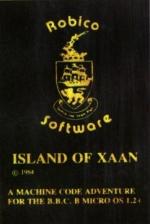 Before I used to review adventures, the ones I played from choice were by Acornsoft and Level 9. This excellent game from Robico Software reminded me of what I have been missing in many that I have seen since - really well-written text and lots of it. On the screen that is, there is little documentation. There are no graphics of course, but who needs them? Do you want pictures constraining your imagination in a well-written novel?

Technically, Island Of Xaan is very cleverly written, all machine code with extensive use of text compression which does not prevent descriptions appearing quickly on the screen. The descriptions are most atmospheric and occasionally very witty. What's more, there is not a spelling mistake, split word or program bug anywhere. If the game is successful (as it deserves to be) the company plan to market a disc version. I managed to transfer my copy to disc but it was a very tricky and time-consuming operation.

You start off locked up in a high security prison on the island from which your immediate task is to escape. There is a rather obscure puzzles to be solved before you get out, and I suspect that Robico's hints service will be inundated at this point (OK, I admit it, I phoned the author for help!). After you get out of the prison, there is a vast landscape to explore, much of which needs careful mapping. To escape from the island, you have to assemble a disguise from bits and pieces you find in various places and also collect treasures. The latter are not just for point scoring - you can't actually get off the island if you miss any.

My only criticism of the game is that the puzzles are a bit too patchy - too difficult at the start then rather thin-on-the-ground for some while after. Nevertheless, I would recommend Island Of Xaan highly to those who enjoy the stimulation of really well written classic text only adventures. When I spoke to the author, he mentioned that it was the first adventure that he had written. My response - write more!