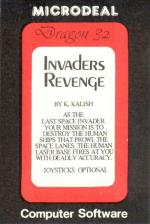 A neat twist to the Invaders theme making you the sole survivor now battling against the dreaded humans. Best played with joysticks.

This version contains some of the best sound effects yet to accompany such a game. Bombs dropping, lasers evading, enemy colliding, a sometimes confusing screen filled with action.

Your aim is to destroy the human ships prowling the space lanes and avoid that laser base. There is a two player option which greatly enhances the competitive aspect. Those suffering from sore fire-button thumbs can rest up when hitting the 'P' key which freezes the screen.

Highly addictive, fast and in all respects as near to arcade standard as makes no difference.

A very good game... It really deserves its five star rating - I thoroughly enjoyed it.