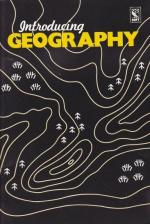 Introducing Geography is a set of four simulation programs on three discs, which link up with the BBC School Radio's programme of the same name.

River. "You are travelling in a small plane in a remote mountain region. Your engine fails. Luckily you manage to land skilfully in a marsh and escape with only cuts and bruises. That was the easy part - now you must survive... You must find a section of the river and follow its source without leaving its banks until you reach the sea... Unfortunately, your pilot's map only shows coloured lined called contours, which indicate the height and shape of the land you are travelling through. These will give you clues to help you find and follow the river valleys."

The program offers three levels of difficulty: find a section of river and follow it to the sea in as short a time as possible - beware the cliffs; find the route to the sea, but answer questions about map symbols and river words; or finally solve further problems, which involve understanding a cross-section, choosing a suitable campsite and steering your raft through the river meanders. Reach the coast in the time allowed or see your chance of rescue float past.

The Demo facility offered in this program is a very useful feature for teachers or parents wishing to try it out and for children who want to practise the Meander Game - practised arcadians should do well at this with their keyboard skills!

Flight. "You are a long distance airline pilot. Not only do you have to fly your aircraft safely over mountains and oceans to far-off cities, but you also have to plan and research your own route beforehand. Flight takes you on four major trips from London to: Adelaide, Johannesburg, Los Angeles and Buenos Aires. During the flight you will be required to: answer questions about the features you are likely to see from your cockpit on the way to each destination; manoeuvre the plane through mountain ranges; and land safely without running out of fuel. Can you meet the challenge?"

It really is quite a challenge. Each route is flown one stage at a time. The computer screen shows a representation of the scenery flown over, with panels for multiple-choice questions and information about some of the features. Questions remain on screen for the length of time it takes for one screen-full of information to scroll through and should be answered within this time. Flying slower lengthens the time available for answering, but this is very tricky and will depend on the quality of the preparation and the atlas used - I'm sure the major tributary of the Congo has moved since my atlas was published. Certainly, those found in most primary school classrooms will not be good enough. There is also space for flight instrument information and an indicator warns of impending dangers such as flying too low or running out of fuel.

Once the route has been chosen, players are shown a list of jumbled-up place names. These are the places they will fly over on the first stage of their route - don't expect many straight lines! Once unscrambled - beware different spellings in atlases (MARSEILLE, MARSEILLES) and the occasional boob in the program (SEMARILLSI), the list of places will show them the exact route.

The print out of a flight certificate for those who succeed in completing a route is a pleasing touch, and much more satisfying than a "Well done" on the screen.

Summit. The aim of the program is to give the user some appreciation of the environmental conditions that man faces in high mountain regions. Children learn about the physical geography of a mountain area along with the problems of planning an expedition to the summit of the highest mountain in the world.

The program follows the route of Chris Bonington's 1973 expedition. It begins by giving background information and then starts the climb from Camp 2 at the bottom of the South-West face of Everest. Players have to plan how to deploy climbing teams and supplies at camps along the route; there are only 30 days in which to complete the climb.

In the program, just as on the real expedition, there is a weather report every morning. The climbing team encounter many dangers and difficulties. These all cause delays, serving to illustrate the real hazards to life and limb posed by the harsh conditions. There is a planning chart that shows where the climbing teams, the Sherpas and every item of equipment are situated. This is where the next moves are tried out. If the teams are ready to climb, then their progress is seen on the mountain route.

Nomad. In this program you take the role of a Fulani in charge of 20 xebu cattle over a 20 (yes, twenty!) year period. You have two tasks: to ensure your herd gets good grazing on savanna grass or, if that is unavailable, thornscrub; to visit local towns and sell the butter produced from the zebus' milk. In exchange you will receive new cattle. There are many hazards which may endanger your herd - diseases, hyenas. Your aim is to keep your herd alive and even increase it during the period if you can and success depends on observing the pattern of rainfall each month and the effect it has on the vegetation.

The radio programme connected with these simulations is intended for the 9-13 age range. With the exception of the first program, River, which has several levels of difficulty, the format and content of the programs are, to my mind, most suited to the middle/lower secondary geography programme and hopefully might encourage secondary specialists to consider following up the use of the micro in computer-assisted learning which now goes on in many primary schools. I've never been too keen on the Kingdom type programs - too much chance for my liking - so the last two programs didn't appeal greatly to me, but the first two, despite the few mistakes in Flight, will be very useful in developing map and atlas work.

The BBC has produced a superbly illustrated book with the same title to go with the series. While it is not directly linked to the computer software, it does "provide a lively introduction to geography and the environment" and will provide much useful introduction and backup material.