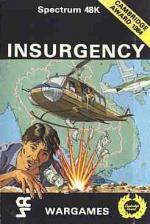 I must confess that I really do not know how C. C. S. do it. One minute they put out a truly enthralling games such as The Prince, the next they try to foist the most awful garbage on us, like Blue Riband. Then they bounce back again with an excellent offering like Insurgency. I must confess to being totally baffled. Insurgency is a two-player game of guerrilla warfare in which one player is the Sandinistas, or the VC's, while the other is the usual fascist oppressor. There is a selection of 100 maps to play on an each contains a number of villages connected by roads, several areas of jungle (accessible to guerrillas and army helicopters) and mountains (accessible to all) In each map the guerrillas are being supplied from the North and the army from the South. Supplies arrive by air through the game, but you have to be able to collect them. The army has a wider choice of units, with armour, aircraft, artillery, trucks and medics, but the guerrillas have an advantage of being able to move faster through the jungle, thus remaining out of reach.

As the game progresses each side builds up a picture of the other's position by means of intelligence reports, and then they attempt to take over villages, block roads with mines and so on. The guerrillas can recruit villagers and provide them with food and arms. But the army medics can improve their health, which helps to bring them back into the government fold.

The number of options available at any one time is amazingly high and I got really involved in running my Mujaheddin campaign. As with The Prince- though, the drawback is that only one player is supposed to be at the screen at any time, which strikes me as something of a contradiction when you consider that multi-player games are supposed to bring increased sociability. The graphics also leave something to be desired (although they are well up to the usual strategy game standard - which isn't very high). All in all, however, a very impressive game, and the author one to watch for the future.

A very impressive game, and the author is one to watch for the future.