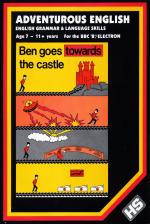 The programs in the Read Right Away Series from HS Software (formerly Highlight Software) have been firm favourites with my children for several years. The super graphics and sound used in the games situations offer tremendous encouragement to youngsters who may have had difficulty with reading. And even those who don't really need the practice feel disappointed if they'er not given their turn to practise their phonics. They love saving (or not in some cases!) the maiden from the burning house in Firefighter and making their swimmer dive into the pool in Sploosh. My own favourite is Pyramids, in which little men dance to a sand dance tune while a pyramid is being built!

The latest addition to this series is Reading Pack 2A, which contains two games that aim to improve reading skills, and is intended for children in the six to nine age range.

Skatechase is the first game, in which you have to use a skateboard and pick the right pairs of letters to fill the gaps in the words. The higher the skill level you choose, the fewer mistakes you are allowed. The operation of the program is extremely simple - the cursor keys are used to move the skateboarder and Return selects and places the letters. The "hero" has to jump through fire, over water and snakes, and up ramps to avoid the killer shark (a bit like James Bond!) to carry the letters to the correct slot.

Soundsport offers an opportunity for you to participate in four sports - a sort of mini Olympics - competing against one another and the clock in order to complete words with the correct endings. The operation of the program is similar to Skatechase, but this time the higher the skill level you choose, the less time you are allowed, and instead of choosing harder or easier words you can select from quite a range of sounds, i.e. the ones you really need to practise.

The next two packs I'm not so sure about. Entertaining English and Adventurous English are series of educational games that help children to develop their English grammar and language skills. When I spoke to the author, Stuart Forbes, I compared the first with a jazzed up version of First Aid In English, a grammar book few readers are likely to remember. Perhaps I was being a little unfair because, while it certainly offers a very structured approach, it is far more enjoyable and teacjers of English as a second language in particular may find in very useful.

Busy performs a range of actions, which the player has to describe. Over 150 different verb/adverb combinations are accepted and the actions are replayed to music if successfully described within the time limit. High scores are earned for imaginative or unusual descriptions. The skill level again sets the time limit and there is a choice of verb only or verb plus adverb.

The second program on the Entertaining English disc/cassette is Timeslip, which deals with past and present tenses. A rocket collects each verb in turn from a series of sentences and travels back in time to an eerie cave. The player has to choose or type in the correct past tense of the verb and also avoid a collision with the manic pterodactyl, as this destroys the laser defences and lowers the scores. In the first three skill levels, the endings - simple and difficult (-ed endings and irregular endings) have to be matched, while in levels four to six the correct word has to be typed in.

If you and your children enjoy playing with words and meanings, then you'll find Crosswords a useful program. It works from a menu which gives access to the instructions, loading crossword files (20 files ranging in difficulty come on the disc/cassette), making and correcting crosswords. It is possible to use the official speech chip but, as I don't have one, I'm not able to comment on its effectiveness.

Unlike most crosswords, this one uses co-ordinates to find the position of initial letters. When the cursor has been moved onto one of these spaces, the clue(s) are displayed below the grid. The letter is typed into a space and the cursor moved to the next using the cursor keys before the next letter is typed in. The blank spaces are filled by pressing the Space bar when making a crossword, and when all the words and spaces are in place, the clues are entered after the cursor has been moved to the first across word and Escape pressed. On completion, the crossword is saved by pressing Copy.

It produces a very pleasing printout on an Epson printer and there is a multiple copy option. It is in the making of crosswords that I think this program will be of greatest use. Supplying clues within the maximum number of characters allowed is quite a problem solving exercise in itself! Individuals sitting at home may be happy to solve the puzzles at the screen, but I can't imagine that it would be considered good use of computer time in the classroom situation. Considering HS's very clever use of graphics and options in their other programs, I was very surprised to find that there is no variation possible on the size of grid - except by blanking off the outer rows/columns, of course. I certainly expected to be able to state the size of the grid I wished to work on where making a new crossword!

All the programs are available on cassette (BBC and Electron) and disc (40 and 80 track and Master Compact). Prices range from £7.95 for the cheapest individual program to £19.95 for the excellent value Bumper packs.