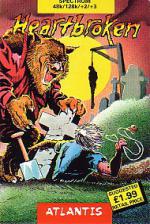 I know people are always saying that there should be more software aimed at girlies, but giving a game a title which sounds like a Mills and Boon novel isn't guaranteed to make it attractive to anyone. The fact that the cover shows a man with a slingshot climbing out of a grave and being attacked by a werewolf in a graveyard with a corpse hanging about from a gibbet (honest) soon lets you into the secret that this is actually a scary supernatural arcade adventure, and not some role-playing fantasy about young Annabel's doomed quest for big snogs with hunky Brett in 19th century Cornwall.

The plot, such as it is, is that an evil warlock has kidnapped the King's daughter, and created an army of ghosties, ghoulies and trolls to guard her.

You are armed with the wizard Merlin's magic thunderbolt, which sees off most of the baddies with no problems. But to succeed in your quest you have to find his spell book, a challenge which took me all of thirty seconds to achieve. To use the spells, though, you also have to find a magic cauldron and accumulate plenty of points, whereupon you can use joystick down to select a spell (shown at the bottom of the screen), and fire to activate it.

It must be said that Heartbroken doesn't seem remarkably challenging; you can move quite freely around dozens of screens, polishing off baddies and collecting items, before you run into any sort of real challenge. However, some of the backgrounds are very nicely drawn, the animation's fine (apart from the fact that the hero's legs don't seem to move as he runs along) and the sound effects are reasonable.

For £1.99, the arcade addict could probably squeeze a good deal of entertainment out of this one: but if it's frantic action you want, look elsewhere.

Some of the backgrounds are very nicely drawn, the animation's fine and the sound effects are reasonable.