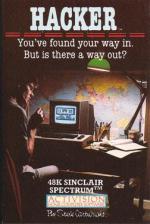 Imagine it's late at night and you've been using your modem to access some bulletin boards. You're tired and want to go to bed but you decide to ring just one more number. Accidentally, you misdial one of the digits and your screen turns blue with the prompt 'Logon Please.' Somehow you've hacked into another computer network. Now all you have to do is get out! In Hacker, that is easier said than done. There are no instructions other than those necessary to load the program. The rest is up to you.

Assuming you do succeed in accessing this 'network' (and help comes from the least likely source), then the game proper starts. The screen now shows a schematic of a Subterranean Remote Unit (SRU). You are asked to help complete a diagnostic scan of the device to ensure that it is in working condition. A successful scan satisfies the computer, which then sends you on to the next stage of the game. You are officially welcomed into the Magma Corporation's central computer which garbles cryptically about everything being nearly ready and the prospects of world domination. You are then presented with a screen displaying a world map overlaid with a grid. You are asked your name (no trick there) and to set up the map so that the night and day areas match those of your current setting.

When all this is done, the position of your SRU is high- lighted on the map. The top half of the screen is split into three displays. On the left is a kind of option menu. This allows you to leave the subterranean network at certain junctions which correspond to locations of various major cities, use infra red to enable night vision and a variety of other functions. The centre section displays the view from your SRU. The right hand section contains a compass and message window (which only tells you that there is a message for you to read it you have to press the 'M' key).

You can move about the network grid, though there are specific routes to certain locations which you have to discover, and 'pop up' in various cities. You soon discover, via messages, that the company has lost a secret document and various spies across the world each have part of it. By buying items off spies and giving them money or other items, you can collect all the parts of the document and then take them to ... ah, that would be telling! Your task is made complicated by several factors. First, there is a time limit. Of course, you have no idea what to trade with whom. Eventually, satellites begin searching for you (as Magma Ltd realise that there has been a security break) and if you fail to satisfy their security checks, you are thrown out of the system. All this, coupled with the fact that the spies are only out to satisfy their own ends and therefore, can mislead you, makes winning a complex task indeed.

'This is a totally original game with an excellent theme and atmosphere. It is well implemented (with the exception of the satellites, which could have been better) and very addictive. Because it isn't really all that fast paced, it may not appeal to some but it still deserves success. The whole thing is littered with puzzles and clues and would make a great plot for a suspense movie. Well done.'

'This might be the game for budding hackers, but experienced hackers may find it a bit too easy. DO NOT be disheartened with the welcoming message of 'LOGON' because it really is a letdown after the initial happiness of hacking into this mega-big company, only to find that the same thing happens each time you attempt to hack in. The game reminded me of the film War Games, but instead of protecting the world, you, as a recognised secret agent, must help the company go for total world domination. This is obtained by trading with other agents, and digging tunnels across the South Atlantic. Try to avoid the satellites as every time they get you, you are confronted with a high-level security check which becomes harder the further you get. Hacker has nice colourful graphics but hardly any sound. The bad point of the game is that there are no random features at all, even the passwords. An interesting and challenging game for the would-be hacker who can't afford a hundred odd pounds to get into real telephone naughtiness'

'This isn't an arcade game, and it's not an adventure either- it's sort of in between the two. Generally games like this and players like me don't go together - but I found it easy to get into Hacker, which was a surprise. Graphically it is a bit of a disappointment, and sound is very poorly used but I found the same fun to play, with a continuing sense of achievement which spurred me on to complete the next bit. I'd recommend this to anyone who likes "think" games, but I don't think arcade players would enjoy it too much as it can get a little boring at times.'

I'd recommend this to anyone who likes "think" games, but I don't think arcade players would enjoy it too much as it can get a little boring at times.