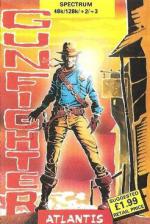 They didn't call the Wild West "Wild" for nothing, you know. No. They called it that because it was downright dangerous, but the Downright Dangerous West didn't alliterate. Anyway, the best paid job in the area - apart from being a criminal - was that of a Sheriff. And that's you. Sheriff of Hicksville USA.

The town is being terrorised by a ruthless gang of criminals with excruciating names like T. P. Wigwam and Hug Yorway, rootin' tootin' pistol shootin' dudes, every one.

Moving around the semi 3-D screen in your huge Stetson, plodding about and waiting for a message to pop up informing you that one of the brigands is after you. They'll flash up at the bottom of the screen saying that they're in The Street or The Saloon or something and looking for trouble. Now you've got to work your way to the place (easy if you've made a map, damned impossible otherwise) and shoot it out.

The graphics are pretty good, although they move a bit too slowly for my liking, and the gunfights are nicely orchestrated - if you shoot a bad guy in the back you are branded a coward. Not bad for a couple of quid then, especially with inventive touches like the outrageously unfair roulette wheel in the casino and the Doc's house where you can get yourself an extra life.

Above average shoot-out search game. Nice graphics although the action slows a little between gunfights.

Above average shoot-out search game. Nice graphics although the action slows a little between gunfights.