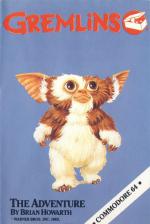 First, my embarrassing experience with those pesky gremlins. I'm always excited by the prospect of playing a game created by Brian Howarth of Digital Fantasia fame. If you haven't tackled games like Waxworks or Perseus and Andromeda then you've been missing out. Gremlins, distributed by Adventure International, looks rather similar to the recent Scott Adams games (Hulk and Spiderman) with excellent split-screen graphics and a great storyline.

If you haven't seen the film, don't worry, since you can succeed in your task without having a degree in gremlin psychology although I'm of the opinion that those who have endured the movie may survive a little longer in the game.

The graphics in Gremlins really are superb. Many of the screens feature animated gremlins - waving their arms, chucking darts (at guess who?), and even ending up in the blender. Within minutes of switching on. I'd cooked myself a truly exotic meal in the kitchen, though unfortunately I didn't have time to sit down and enjoy it.

Before you could say 'knife and fork', in popped a gang of evil little green creatures who chased me all over the house and ended up by making mincemeat out of me!I For a wizard who's bested balrogs and had dragons for breakfast, this was really too much to bear. Even worse, however hard I tried, I couldn't get much further - not, that is, until I'd found a very useful piece of cutting equipment, but that's another story.

Gremlins has many enjoyable touches - enter 'Examine gremlin' (if there's one there) and you are rewarded with a close-up view of the horrible little creature. On my copy there was also a bug which, if you typed 'Enter' on its own, spirited you to a nameless location which is in fact part of a department store. Presumably the location's name was missed out of the data tables, but the effect can be rather confusing if you don't know what to expect. Adventure International assure me that the bug will be fixed on future versions, however.

There are over 40 locations, which isn't an enormous amount by today's standards, although you'll find quite a bit to keep you busy in each place. What's more you'll need to revisit locations several times before you can get anywhere near cracking the game, which you do by wiping out the nasty little critters before they get you and the rest of the town. As it is, Gremlins is definitely up to Brian Howarth's usual high standards and worth splashing out on.

Graphics really are superb; many screens feature animated gremlins - waving their arms, chucking darts and even ending up in the blender.