Published in Your Sinclair #4 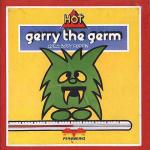 Gerry the Germ comes in a square box. Gerry the Germ has its instructions in the form of a cartoon poster. Gerry the Germ is obviously supposed to be a fun game. Well let me tell you, fun it ain't. At the heart of this biological misadventure is a good idea. Somebody's brain was working when they came up with the idea of showing your effective infectiveness by undoing aN the good of a body's antibodies. But somewhere between hand and mouth something went wrong.

The problem is that the interlinked arcade games just aren't fun. What they are is infuriating. This must be the first time a germ has come close to causing a purely mental state - a breakdown. I battled for ages to try and capture oxygen in the lungs or stop that leaky bladder but in the end the main lesson I learnt wasn't biological. Bad taste jokes and funny sprites do not a good game make. Somebody forgot to ensure that it was playable.

But the worst thing is this - because it's a 'fun' game, Gerry doesn't die. Indeed it seemed set to go on forever until I rembered that advertisement. I reached for my Domestos. Well, it is guaranteed to kill 90% of all known germs. From now on I'm leading a clean life.

Bad taste jokes and funny sprites do not a good game make. Somebody forgot to ensure that it was playable.