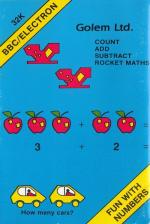 Fun With Numbers is a set of four programs that teach and test basic counting, addition and subtraction skills intended for children in the 4 to 7 age range. In other words, it's yet another set of drill and practice programs that have been spawned by educational software houses, magazines and teachers in their early attempts at programming. Of course, they can provide a very useful aid for some children, but to my mind there are many more profitable and creative uses available for the micro.

Count allows the user to select between easy and less easy examples and goes on to display a random number of cars in front of a colourful sheet. They are always set out in rows of three (it would be more useful if the teacher/parent had some control over this). If the child gets the right answer, the cars move off down the road. In the easy examples, the cars other than in the top row grow stilts to bring them up to the same level, which some children found amusing, while others just said "Cars can't do that!" If they got it wrong, they were asked to count with the computer.

In the Add program, the users again have the option of easy or less easy examples. Apples fall from a tree on either side of the trunk and the children are expected to add the two lots together. Get it wrong and the apples are transferred to the right hand side of the screen while the children count them. The presentation is effective, and the program achieves its aims.

Rocket Maths has an arcade flavour about it, which will appeal to a lot of children. The object of the game is to match addition, subtraction or both with correct answers by shooting a laser gun. Options extend to easy, harder and hard examples. The screen shows an energy line which gets shorter with the longer time the user takes to give an answer and is recharged by a correct answer - fully, however rundown it was! The scoring is recorded at the top of the screen and this is transferred to a Top Ten Table (assuming the score is in the top ten of course!) at the end of the game.

Not a set of programs I'd give £10 for these days, but there are a lot worse to be obtained if you need programs of this nature to add to your collection.

Not a set of programs I'd give £10 for these days, but there are a lot worse to be obtained if you need programs of this nature to add to your collection.