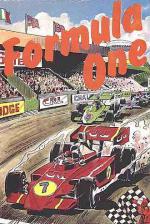 Of all the daydreams which never see reality, Grand Prix racing must be a favourite. There are plenty of programs for budding drivers, but few which capture the atmosphere of the season rather than the skill of driving. Formula One from CRL redresses the balance with a fine simulation of the sport from the team manager's point of view.

You are asked to choose a team and a sponsor, and set a level of difficulty for the game. You then get to spend the loot - Formula One cars cost vast sums of money to design, and even a million will not go far. Money can be concentrated on engine design, hiring better drivers, better crews, or chassis design. If your cars are raceworthy then it's on to the grid for the first race of a 16 race season.

As in the grandaddy of sports simulations, Football Manager, Formula One shows you the highlights of the race. Unlike Grand Prix Manager, Silicon Joy's follow-up to their football game, Formula One does it very well indeed. Cars whizz past in the right order, and if you are quick you can spot the numbers - just like the real thing. A leader board constantly updates the times and positions of the first six cars, and messages at the bottom of the screen inform you of shunts, punctures, and other setbacks to individual drivers.

Pitstops are handled beautifully. You can either request them or be compelled to make them. A short arcade sequence involves sending a mechanic flying round the car changing the wheels as fast as he can. The better the crew the quicker he moves, but you can lose precious seconds if you fail to line him up correctly.

You also have a choice of five different types of tyre and, as in the sport, you can win or lose races on the wrong choice. Weather is the factor here, and you get reports on that both before and during the race. At the end of each Grand Prix the tables are displayed for the Drivers' and Constructors' championship. Your aim is to be top of both.

As a simple game against the computer, Formula One would be great fun, but in fact up to six players can take part. Once you get used to the pit stop procedure, it should not be too difficult to pass the joystick around swiftly enough to avoid argument; the other operations are performed without time limit. That opens up the game to a much richer form of entertainment.

Easy enough at novice level, very tough at expert level, Formula One is a rare example of a simulation which combines attractive displays, good game structure and an exciting theme.