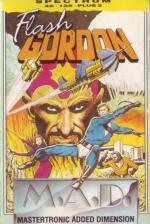 A decade ago, you could go to the flicks of a Saturday morn' and see part of a weekly serial, probably the most famous of these being Flash Gordon. But, alas, it had to end. Many of the cinemas either closed down or simply just stopped showing serials. But Flash Gordon wasn't gonna stop there, no sirree. He was gonna fight for truth, justice and a computer licence. Being the great American hero that he is, he got it of course - from Mastertronic: one of the first heavy-duty budget licences Mastertronic has left it to Icon Design to come up with the goods and they have done it again!

Flash has to save the world. Fine, that's the easy part. He has to do it in 24 hours. Simplicity itself. First, though, he has to work out the controls and I found this nearly impossible.

Part 1 is travelling through a jungle, collecting items, just like Tarzan. Then, in Part 2, he has to fight Prince Barin to win his trust. Finally, it's a bike ride over a chequered landscape.

I quite enjoyed it, after the shaky start of course, and I would well recommend buying this if you're a budget fan.

After a boring start, this multi-load arcade-adventure really gets going. Good budget release.

After a boring start, this multi-load arcade-adventure really gets going.