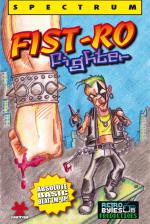 In my youth (mid-80s) I bought a BBC Micro game called Subway Vigilante, a monochrome beat-'em-up contender for the worst game of all time. It was practically impossible to hit your opponent, difficult to turn around, had no music or sound, and actually defeating a bad guy involved getting in one lucky punch, retreating for about ten seconds and then repeating.

Fist-Ro Fighter is a brand new platform game for the Spectrum and is, to all intents and purposes, Subway Vigilante (with all of its flaws) infused with colour and transferred to a ladders and levels type game. You take control of one of Barcelona's top law officials and, accordingly to the daft instructions, are charged with utilising the power of "-RO! " to topple six different bad guys.

Actually, the instructions for Fist-Ro Fighter make the game seem a lot more exciting than it ultimately proves to be. They speak of a "-RO!" health bar which you can build up by hitting villains five times in a row; this will concentrate the power of your ancestors in your fist and allow you to make short work of later attackers. But to say that actually being able to do this is hit and miss is to be exceedingly generous...

It's not often that I read the instructions, start a game and end up being clobbered by the very first fighter over and over again for more than 15 minutes. However, that's what happened here. Indeed, the whole experience was so vexing that I was on the verge of reviewing it with "Fist-Ro Fighter is unworthy of even being loaded"...

The number of sins this game commits are astronomical but let's take the most obvious.

Firstly, there are only three controls: Left, Right and Punch. There's an Up key, but that's not used in the fighting. As for the fighting itself, that consists of walking up to an adversary and throwing a punch at his face. Said adversary rarely stands still - you'll get two punches in at best before he fights back. Hence, raising the "-KO" meter by bashing him five times in quick succession can't happen; instead you must try and retreat without being hit yourself. If there were a Jump key, the game mechanics would change, and you might feasibly be able to escape. But there isn't, so you're stuck with running away from him, whilst he chases you Benny Hill style.

Your sprite, and that of your opponents are very similar - same size, same colours - so it's very easy to lose track of who's who. It's also difficult to turn around, the computer seems to only be able to cope with a direction key or punch. Add to this that you must play the game in a very cramped playing area. You can't move from screen to screen freely; you must complete them in a strict sequence. Failure sends you all the way back to the beginning.

After copying the techniques in FunkySpectrum's YouTube video of the game, I did manage to progress to the second screen and, after another ten minutes of frantically running left and right with the odd punch, I beat up two more adversaries and could proceed to screen three. I walked into it and found I was now standing on some spikes and was instantly killed. At this point I decided life was too short.

I would go so far as to say that Fist-Ro Fighter is virtually unplayable. Any "progress" I made was entirely due to the fact that more energy-giving bowls of rice appeared in some games than others. It is actually worse than Subway Vigilante, which means that it would make it onto my list of the worst games I've ever played. And if you're thinking perhaps it might make up for its flaws with superb sound and music, you'd be wrong. There are none.

The only thing I found nice was the animated expressions of the Dragonball Z clone on the right of the screen.

Sorry, Retrobytes, you'll have to do a lot better than this.