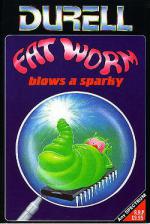 You, as the worm in the title travel the inside of a Spectrum, collecting spindles and avoiding creepers, sputniks and sparkies.

The screen has a 'status' display in the lower portion, giving you an indication of how much energy you have left, score, hi-score etc. The remainder of your screen shows the world in which Wormie can travel. It's a plan view, pretending to be three-dimensional.

You're looking for a disc drive, but as you do so bugs swarm around and do unfriendly things to you. In an attempt to de-bug (ha, ha, ha) the system, you can shoot the various aliens. Like Durell says. Its well crucial man.

Screen movement is reasonably pleasant but the real disappointment is the worm itself. It looks uncomfortably similar to a couple of triangles, stuck together by a black line. The Spindles rotate better.

The gameplay is pacey - things keep strolling along in their own time and Wormie can almost be described as achieving a decent lick in some places.

An original looking game, with a dubious storyline and an inflated price. Could have made a good budget title.

An original looking game, with a dubious storyline and an inflated price. Could have made a good budget title.