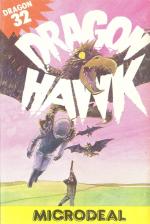 Dragon Hawk is a "busy" game - there is a lot going on and you have to be on your toes. Your job is to prevent the hawk from carrying Freddy off and to score points. Armed with a rifle and a basket, you have to shoot the hawk and then fetch the basket to catch Freddy. Other targets present themselves - flies, larvae and eggs - all of which are a potential nuisance. Although what the flying larvae are doing up there I've no idea!

Loading was no problem and the game - joystick or keyboard control - ran smoothly. What I found annoying was the very messy screen presentation that spoiled some of the very good graphics. When the hawk rose to carry Freddy a thick black and white bar appeared. The larvae created a stepping stone barrier which you had to shoot through and sometimes prevented your reaching the basket. At some stages you have a littered screen which simply clogs up the game.

A good idea with some nice animation. A Top 10 score table is included and an auto mode. A lot of nice features but not enough to save the game.

A good idea with some nice animation... A lot of nice features but not enough to save the game.