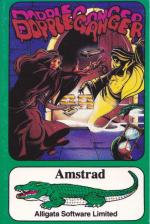 Another game that saw its first incarnation as a full price title and is now experiencing a second lease of life at a budget price. It's a 26 room arcade adventure featuring a sorceress and her alter ego, both of whom you have to control.

The 25 rooms are in 'isometric' 3D and are connected by a number of doorways with different coloured frames. The significance of this is that the sorceress can only pass through some of the doors and her alter ego through others. This means that you need to use both characters to compete the game.

The task is to collect various ingots of gold, silver and bronze and return them to the location where the two characters start. There are plenty of problems along the way; including locked doors for which you need a colour-coded key, energy sapping spiders, monster heads and other things which can be stopped with particular objects - which objects you have to discover as you play.

Many things sap the energy of the two characters; but energy can be replenished in the right room. The graphics are pleasant and atmospheric and, although the game is quite small and not too complicated, it provides some fun and challenge for a while. Definitely good value as a budget title.

It's not enormous I'll grant you, but what there is of this game is good stuff. There's quite a bit of originality to the gameplay, and that price is pretty appealing.

Controls are difficult, and it's a small game, but the graphics aren't bad and it's a nice idea. Not bad for the price.

P. Good graphics.
P. Use of two characters.
P. Some puzzling and exploration needed.
P. Much better value at £3.

N. Not very big or complicated.
N. Character movement can be awkward.

Colour coding problems on the doors, I'm afraid. Still playable, but only with difficulty.

The graphics are pleasant and atmospheric and, although the game is quite small and not too complicated, it provides some fun and challenge for a while.