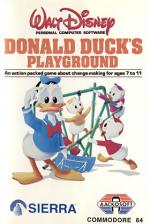 Walt Disney Productions have a reputation for high quality products and this first foray into the world of computer software will not upset this reputation one iota. The graphics are produced to. as high a standard as one might expect from the kings of cartoons, and the game concept combines education and fun in a highly professional way.

Huey, Dewey and Louie want Uncle Donald to build them a playground but a project like this needs financing and first the money must be earned.

In Donald Duck's town the main street has three shops on one side and four work places on the other. Jobs can be undertaken in any order and as many times as the child wishes. The jobs involved are: loading luggage into the correct trailer by matching the three letter destination tags at McDuck Airlines; controlling the points on the Amquack Railway so that a train can reach as many destinations as possible in the time allotted; placing toys on the correct shelves in the toy shop; catching fruits and vegetables in the produce market and storing them in the correct boxes.

Each job tests a different skill. The railway game is a test of logic, the airline tests letter recognition, shape and pattern matching is tested in the toy shop, and hand-to-eye coordination in the produce market. On entering any of these buildings the child must first choose how long the job will last and this can be up to eight minutes duration.

After each stage comes payday when the money earned is distributed in notes and coin to the correct piles and the savings total increased.

When the child thinks that enough money has been earned, he can start constructing the playground. To do this meant a visit to each of the shops. Inside we meet either Mickey Mouse, Minnie or Goofy who have catalogues of their stock of playground equipment.

Up to 15 items may be chosen as long as there is enough cash available and a certain amount of planning must go into this stage to ensure that each of the three floors of the playground can be accessed by a ladder. When an item is selected, the child is invited to count out the money to pay for it from the money piles and if the price cannot be exactly matched the correct amount of change has to be chosen from the till.

All of the scenes in the game are animated in high resolution graphics and even Donald's voice has been synthesised for the produce market scene. If he drops a fruit or vegetable he has a typically Donald-like tantrum, quacking away furiously.

As an educational package this one is difficult to beat because it demands the combination of so many skills on the part of the player. Typically American in its capitalist concepts, it can teach on many levels important lessons about the world of work (if such a world still exists when the child grows up!).

The documentation goes on at length about the fact that the game is so complex that the use of dollars and cents has been retained instead of converting the game to our native currency and remember Donald says, "It makes learning more fun, introducing children at an early age to other people's cultures". I feel this is probably marketing hogwash and that the real reason is tight copyright controls. I feel sure that a pounds and pence variation would be more marketable in this country's schools but for me this did not detract from the high standards set by the game.

As an educational package this one is difficult to beat because it demands the combination of so many skills on the part of the player.