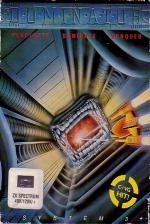 You are the Dominator, and you have to, well, dominate around a bit I suppose; rid the galaxy of the evil alien empire etc. And all set against a (relatively) fast (relatively) colour-clash free and pretty darn attractive in a fluffy strawberry sort of fashion, background.

Played across all of four levels, the game alternates, Salamander like, between side on and overhead view perspectives. The still graphics for both types of levels are equally impressive, or at least the backdrops are. All of the backdrops are animated in a sort of well animated kind of way, indeed there were points that made me sit back and go uurgh! The sprites have come across as well.

Take a look at the screenshots. First thing you notice is the large amount of colour. Now, you know as well as I do that a colourful game automatically looks a lot better than a mono one. Fair enough. So, to reassess the game, strip the colour. What are you left with. Some very badly designed sprites that move very badly. Um, OK. So what else has the game got?

Do I think this game is good? Yes, but not much. I think too much effort has gone into trying to add a little flair to a tried and tested idea and not enough though along the lines of "How can I make something original out of this game".

The main problem lies with the playability. The main ship moves quite fast, but due to poor design the game is just a little too difficult. Right from the start alien waves move in a way so that at certain points they more or less cover the screen, meaning you can't dodge or find a safe spot to fire from.

I had high hopes for Dominator. Oh well...

At first glance an impressively coloured shoot-'em-up. At second, it isn't.

At first glance an impressively coloured shoot-'em-up. At second, it isn't.