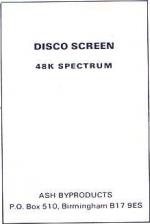 In my quest to find new and unusual programs, I came across this one. It's called Disco Screen, and is used to convert music from your stereo into flashing patterns on your TV.

The program auto-runs on loading and all you have to do is replace the tape in the cassette player with an audio one. There is a choice of two modes, press 'D' for disco and the Spectrum's PAPER flashes as well as producing lines, block patterns and spirographs. Press 'R' for relax mode and you get the same type of patterns but the paper stays black.

This would be an ideal program to use if you run a disco with a video projector. The screen freezes when the music stops and could be used from a headphone socket. The effect was better than I thought it would be and speaking as an ex-DJ I would be more than happy to use it.

Now the bad news. It has bugs. I played one side of 'Thriller' through it and twice it stopped, with an 'Integer out of range' message! It tells you in the brief instructions to use RAND USR 40000 to re-start it, but I could get it to start by pressing CONTINUE and ENTER.

You can buy this program on either tape or microdrive (the tapes takes 3 min 10 secs to load).

The effect was better than I thought it would be and speaking as an ex-DJ I would be more than happy to use it. The trouble is it has bugs, and often stops with an 'Integer out of range' message!
Logout