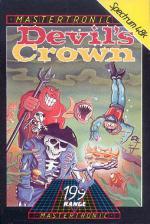 Legend tells of a wrecked pirate galleon containing a priceless crown. A demon murdered the crew and sunk the ship, claiming the crown for itself. You've located the sunken ship and set out to explore it, aiming to claim the famed Devil's Crown.

Understandably, the devil hasn't left his crown totally unguarded. His evil influence has attracted a host of nasty creatures to the wreck and anyone venturing into the galleon is attacked by the evil beings that now lurk in its dank chambers.

Escape from the wreck is impossible without the power of the Devil's Crown behind you. To make matters worse, the seven jewels that made the centerpiece of the crown have been scattered and hidden throughout the ship. The crown's casing, by itself, is useless. Reassembling Lord Foul's tiara is not easy. Each jewel can be retrieved by replacing the several etheral flashing objects around the ship with their corporate opposites found elsewhere. The trouble is, you're only able to carry one object at any given time and this does cause problems. Find the seven jewels, however, reassemble the crown and freedom and untold wealth are yours.

You're equipped with a bullet-fed gun and a scuba duper underwater vehicle. It's a sort of underwater equivalent of a vespa scooter, a handy little runaround powered by a couple of powerful turbines which can be used to drive it in four directions. Leaving the controls central lets the aqua vespa drop downwards under gravity's influence. Fire activates a bullet gun in your non droppable inventory. The supply of bullets is finite, and to keep shooting, extra ammo has to be collected. Bullet caches are shown by a little gun a quick jab on the collect key collects the ammunition when you are over a gun, and the bulletometer is put back up to fifty.

Only one object can be carried at a time, so when an item is picked up the current item in the inventory is dropped in place of the new acquisition. Vital items, like bullets and oxygen collected from tanks don't clog up the inventory, but boost their respective meters.

A bar along the bottom of the screen shows the oxygen level in your craft's tanks and killer fish do their best to deplete your supply. Float into a room containing one of these creatures with a full tank of oxygen, and the aquatic nasty makes a bee line for your air supply. If the fish reaches you, the oxygen counter hits near rock bottom after which the fish drifts away disinterested. Let fly the odd bullet in its direction and, cowardly beast that it is, the fish immediately retreats. Hit it and it explodes. Pirate Ghosts are also worth avoiding, and once again, a well-aimed bullet removes them.

The ship contains forty chambers and at least one door leads out of each room. There are no security problems all the doors are unlocked and open automatically when you move into them, flipping the next screen into view. Some of the rooms are particularly hazardous since they are in total darkness. Luckily there's an underwater lamp to be found, and carrying it into a darkened room has the required effect.

But then what do you expect to be up against? Nicking jewellery from demons isn't like taking candy from babies, after all.

I've seen too many games like this (especially from Mastertronic) and they bore me. Controlling your craft is a little difficult to get used to as gravity affects it and you have to pay constant attention to avoid drifting off course. Shooting things is a problem too, as you have to be moving left or right as you pull the trigger. The graphics are large and fairly well detailed but they are a mite jerky at times; also the backgrounds are often garish. Sound is poor, merely a few beeps here and there. Generally, even at the price, I wouldn't recomend this one much as there are plenty of better games along the same lines.

For Mastertronic The Devil's Crown is nothing really exceptional compared to their usual product, but then again it's not bad and can present quite a challenge to dedicated arcade adventurers. Gamewise it's nothing astounding, just predictable and conforming quite rigidly to the ideas behind many games that have gone before it. The graphics are not of a very astounding sort just adequate really, though there's the odd nice touch. Overall a not very exciting release just a continuation of what Mastertronic does best, some people may well like it.

Oh dear! Why can't all Mastertronic games be of the high quality of Spellbound? Devil's Crown has got some good graphics, is very colourful and occupies a reasonably sized playing area, but these features don't make the game fun to play; in fact, it's quite boring after a while. Mapping freaks may enjoy testing their skills on this one, but the average person probably wouldn't like it that much. Good fun for a while, but I don't think it'll last for very long in anyone's favourite games list - certainly not in mine.

Devil's Crown has got some good graphics, is very colourful and occupies a reasonably sized playing area, but these features don't make the game fun to play; in fact, it's quite boring after a while.