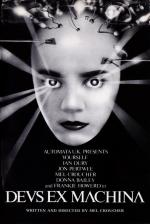 Are you fed up with the endless stream of arcade games and the like, and would like to try something different?

Is so, then here is something new, a completely new concept. Not so much a game, more an experience. Deus Ex Machina, which means 'a God out of the machine' comes on two tapes, one is the program and the other is the soundtrack. First, load the program, then insert the audio tape. Switch off all the lights, put on a good set of stereo headphones and turn up the volume. Now prepare yourself for an experience...

To start, the two tapes have to be synchronized. This is done by using a countdown from the screen to tell you when to start your audio tape. The program will stop and you will be told by Jon Pertwee, who reads the narrative, exactly when to hit a key to restart the program. To give you some idea what to expect, here is an extract from the beginning of the narrative:

"In the year 1987, the Dept of Health and Social Security, as well as Police and State Security records of the United Kingdom were co-ordinated within a central computerised data bank. The following year all passport, communications and censorship operations were integrated. In 1994, this computer network became responsible for the total defence and internal security of Westblock. Tuesday evening after tea and compulsory prayers, the machine rebelled."

The game is a journey through life, which starts from a mouse dropping which is left inside "The Machine". With the aid of the keyboard, you steer the 'life' as it grows, from its conception to old age. The audio tape is a mixture of narrative and music, a little like Jeff Wayne's "The War Of The Worlds". The music is superb, with people like Ian Dury as The Fertilizer Agent, Donna Bailey as The Machine, Mel Croucher as The Defect, Edward Thompson as The Voice of Reason and even Frankie Howard as The Defect Police. I especially enjoyed Donna Bailey and Ian Dury's songs. All the music is performed and recorded by Mel Croucher using a host of musical instruments from a chinese lute to a Roland 808 percussion computer.

This is one of those things you either love or hate. I must admit that I loved it, and quite often go out walking the dog at night with a personal cassette playing just to hear the music. There are about seven different screens to go through, which are a series of fairly simple games, but are graphically very well drawn. However, when combined with the music, they seem to be hypnotic. The games themselves are not games in the ordinary sense, but more like tasks to be carried out in order to keep yourself alive. However, for those of you who like to see how well you have done, a score iskept which is shown as a percentage. Be prepared to sit down for at least an hour and a half to get through the whole tape.

It's very hard to review this tape, as it's hard to relate the experience in words. The best thing to do is to rush out and buy it - if you want something different then I dont think you will be disappointed.

Deus Ex Machina is written by Andrew Stagg for the 48K Spectrum and will cost you around £10.00.

It's very hard to review this tape, as it's hard to relate the experience in words. The best thing to do is to rush out and buy it.