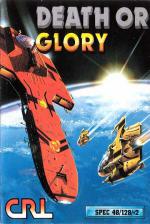 In the void of space an alien invasion fleet heads towards the island planet (island planet??) of New Stratford (well that explains it).

Out on his simple conundrum survey a lonely spacedozer pilot stumbles across a hoard of android fighters. He quickly decides this is his chance to save his planet (not to mention to be a hero) and he drives his dozer straight into the droids and the fleet with the battle cry of Death or Glory.

My first attempt was quite amusing. I took control of my spaceship and pressed the Fire button straight away. Nothing happened! Pulling back on the joystick I managed to thrust the ship forward and with the 360' control it wasn't long before I came across the invasion fleet itself. I tried Fire again whilst above it and voila! Yes, a chunk of it disintegrated. It looked like a bug but, apparently it's the function of the spacedozer, destroying anything in (and under) its path.

Soon, after flying around destroying everything in sight, I wondered exactly how you get on to further levels. After all, this is a scrolly scrolly shoot-'em-up. Suddenly - boong! - I'd been transported into somewhere else.

Funnily enough it looked very similar to the first set of screens, except green.

There is nothing really to complain about with Death or Glory. It has neat graphics, nice movement and quite an original theme. The only thing I wondered was why the Rambostyle weapons cache was missing. Maybe the way you can eat the scenery is actually a bomb underneath the ship which can be dropped but not seen?

Oh well, who cares. It's quite fun anyway.

Quite a smart looking scrolling blast - but there's very little to get excited about. Not exactly startling.

Quite a smart looking scrolling blast - but there's very little to get excited about. Not exactly startling.