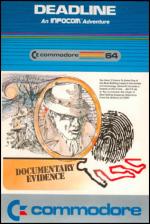 It is always a pleasure to sit down and play an Infocom adventure, even when it's as unusual and different as this. Deadline is the first in Infocom's 'Mystery Series' of adventures (Witness and Suspect being the other two), and gives you the chance to play out the role of an infamous detective, who has been called in to investigate the death of one Mr Robner.

The Chief of Detectives, Warren Coates, is completely convinced that there was no foul play involved, but he wants you to conduct a more thorough investigation all the same, since people are, after all, suspicious by nature.

It turns out, from the Inspector's Casebook provided in the package, that Mr Robner had called the CoD a few days before his demise to inform him that he was altering his will. In fact, Robner was in the process of sending the relevant papers to the CoD when this unfortunate incident happened. Such mitigating circumstances can only cast aspersions over a verdict of 'death by a self-administered overdoese', so just how did Mr Robner come to such a cruel end? Before you can actually arrest a suspect though, you must be able to prove they had the motive, opportunity and are lacking in an alibi ... and you've only got twelve hours, computer time, to do so!

You begin your investigations outside the Robner house on the South lawn. On attempting to vacate the premises you are told that Leaving the estate would mean quitting the case and, most probably, your job. Hmmm! It looks as if you're here to stay ...

A search of the surrounding vicinity proves successful, with the discovery of two strange holes in the ground and the fact that the eccentric gardener, Mr Angus McNabb, doesn't appreciate people treading on his roses. He also objects quite strongly to being hit 'with a lethal blow of the hand', as he does expire quite rapidly. 'Perhaps,' you think, 'I shouldn't have done that,' responds the computer, after a lengthy piece of text is given describing your arrest for the murder of Mr McNabb!

When you actually question the gardener to find out what's wrong, he burbles on and on about his roses and the influence that the bad weather is having on them! Some help!

These responses are typical of not only this adventure, but of all Infocom classics. This is the sort of thing, along with massive vocabularies and detailed location descriptions, that makes their text adventures so much better than anyone else's. For example, kissing someone in Deadline is met with: 'Section 204D, Paragraph 7.6 of the Connecticut Police Code of Conduct specifically prohibits kissing suspects.'!

If there are any words that the program doesn't understand, you are told 'You don't need the word " " to solve this mystery.' - typical of the sort of imaginative reply that one can expect to get when playing an Infocom game, as even most inconceivable questions receive coherent answers. Another example is the reaction to you trying to arrest yourself. Sergeant Duffy, your side-kick, strokes his chin and replies 'Excuse me, sir, but it would cause a bit of a stir at the station to be charging a player with murder.'!

At 11:00 am, an interesting letter addressed to Mrs Robner arrives, full of suspicious comments about her late husband and a fellow called George, ending up: 'See you Friday as usual, Steven'. Sounds as if this could be important and incriminating evidence!

Quickly looking around the house gives rise to more suspicion as there are plenty of clues to be found. With aroused curiosity and some information under your belt, you decide it's high time to follow and maybe question a few people, and start to draw some conclusions.

As an aid to your enquires there are a number of helpful words present in the vocabulary. EXAMINE is as useful as ever and so is SEARCH, although this command has been improved quite a bit to suit the game. Not only is it possible to SEARCH someone or something in a straightforward manner, but you can SEARCH NEAR an object or person. This usually provides more information than a simple EXAMINE.

FINGERPRINT asks the police laboratory to compare the fingerprints of someone/thing with those on file at the lab (that is, if something is worth fingerprinting - most, nay all, of the suspects object to this treatment unfortunately), while ANALYZE results in a lab performing a routine check on something.

Interaction with the other characters in the game is high, as you can freely converse with, and question, anyone in any way, should they be willing to talk to you. For example, MRS JONES, TELL ME ABOUT MRS ROBNER, HEY, MR MCNABB "WHAT'S WRONG?", MRS ROURKE, SHOW ME THE FOOD and other such communication, all elicit useful, and sometimes humourous, responses. This sort of flexibility makes Deadline absorbing and rewarding to play.

One really excellent feature is the WAIT command. It's possible to WAIT FOR or WAIT UNTIL certain times, or even to WAIT FOR someone!

The location descriptions are incredibly informative and one needs little imagination to conjure up an image of their surroundings. When in the garden for instance, you can almost smell the roses!

When you finally decide that you have gathered substantial evidence, you should firstly ACCUSE your suspect, and then ARREST them. Get it right though - your job won't mean much if you don't, as you'll end up losing it!

Deadline is a most unusual approach to a text adventure and is perhaps Infocom's most absorbing to play yet. Unfortunately it is only available on disk, but then what did I tell you about getting a disk drive?

A most unusual approach to a text adventure and Infocom's most absorbing to play yet.