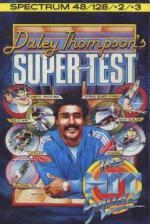 The old Lucozade man himself has had three games made about him. This is the second in the series, which continues on from the classic joystick smasher, Daley Thompson's Decathlon, with a further eight events to squeeze you, tease you and break your wrist in umpteen places. Events are many and varied, and include Pistol Shooting which entails shooting at spinning targets to gain a qualifying score, spring-board diving, cycling and other such lovely things.

Daley gets three chances to qualify in each event - if he fails all three, he's out and must begin from the beginning. Supertest couldn't ever hold the magic which the original Decathlon game possessed, but having said that it's a much slicker title, with more events, better graphics and not nearly as much wrist-aching joystick waggling to be done.

Loads of more-than-playable events which, stuck together in one package, make Daley Thompson's Super Test an extremely good value for money buy.

Loads of more-than-playable events which, stuck together in one package, make Daley Thompson's Super Test an extremely good value for money buy.