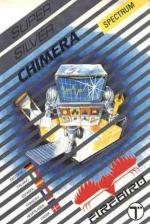 FIREBIRD kicks off its new Super Silver range with another Alien 8 lookalike, Chimera. You play a little robot sent to investigate what the Americans reckon is a Russian satellite. Instead it turns out to be - well, you'll have to complete the map to see the ghostly truth.

The idea is to blow up the ship by constructing warheads and priming them in the correct rooms. Your water and food supply provide limits to the game, as well as a straight time limit.

Fortunately you can replenish the former two with mugs of liquid or nutritious loaves of bread, but watch out - you may need to use those objects for other purposes so guzzle with discretion.

Mapping is vital, as the game contains a great deal of strategy, and to succeed requires careful planning of routes. The similarity to the Ultimate games rests on the 3D graphics and movement of the robot, but it falls short of allowing you to jump or move objects around, except by carrying them.

Hazards include radiators, egg-timers and electric toasters. It's a very domestic environment, but they're all deadly unless you have the right equipment to destroy them. Luckily there are computer terminals around which will give you clues, but use them sparingly - they are scarce.

Although not up to the highest standard of the Ultimate games, Chimera does represent terrific value for money, and those who enjoy these maze-quest arcade-adventures should not hesitate to fork out the pennies for an excellent addition to the genre.

Those who enjoy these maze-quest arcade-adventures should not hesitate to fork out the pennies for an excellent addition to the genre.