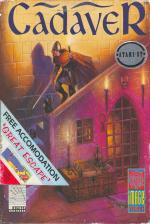 There stands a lonely castle amongst the murky swamps off a far-off land. Once the power base of the mighty Wulf dynasty, it now lies empty - save for the evil necromancer, Dianos. Once the king's chancellor, Dianos used his insidious powers to turn man against man, brother against brother, until all were slain, even the King, dead by his own captain's sword.

Then one fateful day, a stranger appeared. Short of stature but stout of heart, a bounty hunter by trade, the newcomer was hired to venture forth to the castle, and to seek and slay Dianos for his crimes. One man, a captain of the royal guard, spoke in hushed tones, of demons and monsters foul which had taken in with the necromancer, and would do their utmost to aid their master.

Sure of a goodly reward, the hunter made his plans, and that night, set out in a small boat towards the castle, to search out this demon Dianos, and destroy him once and for all.

You, controlling this reckless warrior, must journey through a 3D forced perspective environment, collecting items and artifacts that may be used in your quest. Running and jumping are the basis of your movement, but a mystical icon panel is at hand to tell you of your whereabouts, and what is available to you. Be warned, however, there are traps a-plenty, and your energy is limited. Wise actions will be rewarded with progress, but act foolishly, and all will be lost.

The Bitmaps are back, and how! This 3D isometric adventure (vaguely reminiscent of Ultimate's Knight Lore) is a real departure from their previous blasts, but believe me, this is probably their best product to date!

Control of the dwarf is simple enough, and when it comes to picking up and utilising the myriad objects scattered around the castle, the icon system works surprisingly well, and is quick and easy to use.

The graphics are nothing short of brilliant, and the sheer attention to detail (especially with some of the brickwork and monsters) is stunning. Some of the puzzles are quite easy, but others demand a brain-bending amount of lateral thought, though nothing so complex as to drive you away. Containing five levels, each with a massive 70 rooms, the game has a heck of a lot there to keep you going, so it's a game to be played over a considerable amount of time.

If you're yearning for the bygone days of Ultimate-style action, look no further. Cadaver is well-deserving of a place in everybody's software collection.

If you're yearning for the bygone days of Ultimate-style action, look no further. Cadaver is well-deserving of a place in everybody's software collection.