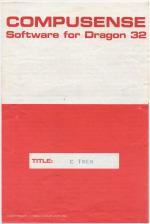 Just as we were gaining on the advancing invaders, we now are showered by Klingons. Klingon-bashing is fast becoming a popular pastime for those who remember immortal phrases like "More thrust Scottie" and "I dinna think she'll take any more!"

This is an American version distributed by Compusense. It came all presented in a plastic bag containing a full sheet of instructions clearly set out. Loading was straightforward.

The commands for the game are given in three easily mastered letter codes. You see the Enterprise (a letter E) on a black sector of space. Movement is achieved by reference to compass directions - a little awkward at first because you have to keep in mind both where you want to go and any obstructions there might be.

There are no increasing levels of difficulty, which could reduce the game's longterm appeal. Instead, a random procedure gives you a target of between 13 and 26 Klingons. Various starbases replenish essentail supplies.

Very little in the way of graphics - only the Short Range Scan shows any action. The rest of the time you are kept busy navigating, doing battle, repairing and checking.

Enjoyable at first, but weak graphics, and poor staying-power.

Enjoyable at first, but weak graphics, and poor staying-power.
Logout