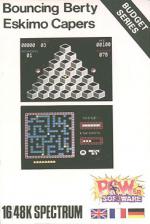 Bouncing Berty is a 'Q-Bert' type game while Eskimo Capers is a 'Pengo' type game. The two come together on this budget-priced cassette. Neither game type needs much explanation. Bouncing Berty has the familiar seven-tier pyramid structure with one ball hazard on the first screens, but these increase as you progress, two balls, then the balls and a snake and so on. The other feature is the discs on either side of the tower onto which Berty can jump to escape to the top of the screen again.

Eskimo Capers has a rather small maze with the traditional blue ice blocks which can be burned away or fired in the direction of travel to squash any of the four bugs that might be in the way. There are also three red blocks which can be moved but not destroyed.

There are four bugs on screen at one time but to get to the next screen, eight in all must be killed off, and these are shown at the base of the playing area.

Control keys: B. B. uses O/A and PI, E. C. uses an odd combination of 'shifted cursors, actually the sinclair keys but used as cursors so 6/9 is left /right 7/8 is up/down with zero to fire
Joystick: Kempston
Keyboard play: Not very responsive
Use of colour: Fair
Graphics: Small, jerky and uninteresting, although in B. B. the pyramid works quite well
Sound: Poor
Skill levels: 1
Lives: 3
Screens: 1

Eskimo Capers is a 'Pengo' type game, and not a very good version at that. Characters are tiny, just one character block, undetailed and insignificant. I think we passed this programming stage about ten centuries ago. The game itself is not overplayable for the simple reason that there are quite a few monsters to kill - 12 in all, counting the four already on screen at the start. This is quite easy until you are about to freeze the last one or two, because these whizz around the maze at an incredible speed, not giving you any chance to kill them whatsoever. Bouncing Berty is a fair version of '0-Ben' with quite a good 3D block effect. This game is exceptionally fast, too fast for me anyway, with three nasties out to get you it's almost unplayable at this stage. Taking into account the fad that more nasties will probably appear on later screens, the complement of difficulty and playability is totally ruined. Generally not really worth the money - probably better to to spend more money on two separate games of better quality.

Bouncing Berty is not particularly good - the graphics are simple and overall the game is rather unaddictive. Eskimo Capers is a poor 'Pengo ' with tiny, jerky graphics. Not much else to say really.

Bouncing Berty is not particularly good - the graphics are simple and overall the game is rather unaddictive. Eskimo Capers is a poor 'Pengo ' with tiny, jerky graphics. Not much else to say really.
Logout