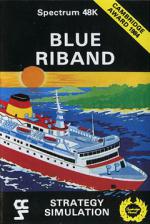 Blue Riband after The Prince is going from the sublime to the ridiculous. In the game you have to pilot a large sea ferry around a number of islands in the shortest possible time without getting sunk. To assist you, you have radar, engine-room telegraph and wheel. Sounds tedious? It is.

As I drove into my day job (even we famous journalists have day jobs - hyperactive Derek Brewster's got about eight!) the other day, my motorbike and I parted comppa8nnyy on the rear wing of a black Cadillac limosine (this bit's not entirely true - it was an Austin Allegro really) which I could have sworn was being driven by one of the Argus heavies - or was it someone from Domark? Anyway, your heroic correspondent flew through the air for some distance, crash landed on a cat's eye and only narrowly missed death at the hands of at least 34 juggernauts. Meanwhile my bike was elsewhere, battered and bent. Shaken, but not stirred, I crawled over to the side of the road and duly collapsed. I awoke in hospital with the thought that I had only another twelve hours to meet the CRASH deadline, so you'll have to forgive me if some of these reviews are a little less thoughtful and caring than usual; but you know how it is - better read than dead.

In the game you have to pilot a large sea ferry around a number of islands in the shortest possible time without getting sunk. Sound tedious? It is.