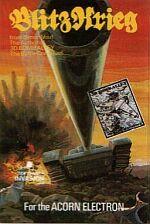 I have noticed an interesting trend for software writers to realise that you don't have to fill the screen with lots of colours, and that the lower resolution screen modes (4 and 5) can be used to good effect, leaving more room for a complex program. Among recent programs praised for their graphics, Cylon Attack, Aviator and Twin Kingdom Valley all use the Mode 5 screen.

The choice of a crisp monochrome Mode 4 display for Blitzkrieg is quite satisfactory to my mind, although we should have been provided with an option to change the colours used (green on black) to suit individual taste.

Blitzkrieg is a tank battle game which is cleverly written. At the bottom of the screen is a fixed view of your own gun turret (which recoils realistically when fired!). On moving left and right (keys or joystick) the distant landscape, at the top of the screen, scrolls to simulate your cockpit view. In the midground are the tanks which you are fighting. These appear at varying distances and move, in real time, relative to the landscape, whether you are scrolling it or not. If they stop and turn towards you, you'd better move quickly to avoid their shells. When you fire yourself the shells take longer to reach more distant tanks and the sound of them blowing up is also attenuated with extra distance. Distant tanks score more, and you get promoted to increasing military ranks as your score progresses.

Although war games are not my favourite theme, this game did earn my admiration for its use of sound and graphics in creating an effective simulation of the three-dimensional world. It feels like a cross between a flight simulator type program (on the ground!) and an arcade game. One final impressive touch is that the program plays a silent game by itself when waiting for a new player to take a turn, just like the ones in real arcades do. The sound may also be switched off in actual play and a freeze game option is provided. My only complaint is that one cannot escape the program with a CTRL-BREAK at the end. I do object to being forced to switch my machine off and on (which is not good for it). Otherwise, excellent.