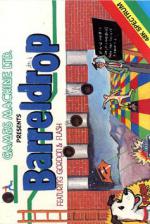 Barreldrop lakes its name from what might be called the chorus line of this game. The two heroes are Gordon and Flash but there's no Ming in this epic! Gordon has blocked drainpipes, five of them in fact, and he's discovered a rather novel way of clearing them. He stands on the roof with five barrels, rolls them down the incline and tries to get them to fall down the blocked pipes. How on earth this is supposed to clear them, goodness knows!

However, it seems to do the trick. Unfortunately if he doesn't get the barrel exactly down the centre of a pipe it gets lost. Successful rolls are returned to him for another go. This is where Flash comes in. He's a dog who appears round the corner - sometimes. If he's visible and Gordon misplaces a barrel Flash will rescue it and return it up the ladder to him. Successfully clearing a screen results in another event, sometimes a riddle sometimes an arcade episode like getting Gordon safely across a floor in which some of the tiles are electrified.

If you manage this, it's back to the chorus line again and more barrels to roll, more drains to be cleared.

I enjoyed it, but the fact that there isn't a concentrated effort on one subject may spoil the fun for the hardened arcade addict.