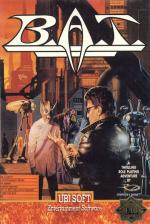 It is the 22nd century. Multi-national corporations have dramatically increased in stature and power, and the governments of the world, feeling threatened by such a state of affairs, have banished the corporate leaders from the face of the Earth.

These outcasts have made the planet Selenia their new home - a world which holds the secrets of Khegol, the element which makes interplanetary travel possible. Back on Earth, however, the Galaxy Confederation have set up BAT, a galaxywide peace-keeping organisation. Their first mission is to stop the evil Vrangor, a maniacal genius who threatens the people of Selenia with bacterial warfare. Unless the Selenians give up their world - and the Khegol - to him, he will annihilate them utterly!

The player is cast as the BAT agent sent out to Selenia to assassinate Vrangor, and restore peace to the galaxy. Once equipped with various items, the player can travel around the world and interact with the myriad races by simply clicking on them with the pointer. Not everybody is willing to talk, however, so a little aggression is required now and then. The real problem is, Vrangor knows exactly what's going on, and has sent scores of assassin droids to dispose of anyone that gets in the way of his plans!

How long has this taken to appear? I first heard of this about two years ago, and only now has it appeared on the screen. In theory BAT's point-and-click icon system would seem to work very well, but in practice it's very long-winded and issuing a command requires too much effort.

The graphics are very nice indeed, but a special mention must go to the sound, supplied by the MV-16, a unit which plugs into the MIDI port and chucks out some really good, but very loud, 16-channel sound!

The only drawback to this is you've got to plug headphones or a hi-fi in to listen to it. However, keen Ubisoft fans will be pleased to hear that all their future releases will use the MV-16. The game itself falls down in one major respect - things happen too quickly, and it doesn't give the player a chance to react.

Barely a minute into the game, I found myself stuck in a toilet, pursued by a killer robot, and with no ammunition and no way out! The price tag is a bit steep too, even with the hardware add-on. If wandering around looking for trouble is your bag, have a look, but definitely try before you buy.

Ouch! Twenty sovs for a C64 game? And that's without the hardware module! Unfortunately, the gameplay suffers from the same problems as the ST version, but the duff graphics and slow disk access time make it even more unrewarding to play.

Unless you find the concept really attractive, you're better off saving your cash.

Hmmm, I'd say try before you buy... Things happen too quickly, and the game doesn't give the player a chance to react.