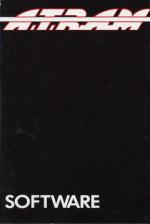 Atram is billed as the 'first in a series of unique computer-aided board games' and it comes in a massive boardgame type box. Atram stands for Advanced Tactical Reconnaissance and Attack Mission. The idea behind it is that it's a simulation of a military exercise carried out by the Royal Navy and US Marine Corps using exactly the same weapons -Carrier Harriers (or AV 8B's as the Yanks call 'em). That's the author's first mistake: who wants to play a simulation of an exercise? Anyone in the games business will tell you that what the consumer wants is slaughter, blood and guts, torture, napalm, and Black Magic, with a little bit of kinky sex thrown in for the older ones. So the whole idea of the game is suspect from the start. I suspect that Miles Bozeat has done this precisely to achieve equality of forces. But any wargamer will tell you how unnecessary that is. The objectives of the game should be changed.

For example, in a standard Avalon-Hill type board wargame which is simulating a historic campaign, the result of the game overall may be a foregone conclusion, but the objective for the players is simply for their side to do better than actually happened in history. So, in Russian Campaign the Germans win if they are still holding Smolensk by June 1944. The two players' sides of the board in Atram are exactly the same, which again is intended to create a more equal starting position in the game; but it tends rather to increase the feeling of unreality and pointlessness still further.

The board itself is very large and beautifully produced. It contains a thin metal sheet and the pieces are made out of that sort of magnetic plastic that used to be on the back of L-plates. This strikes me as a strange presentation decision in view of the fact that magnets and tapes don't mix too well. Thus, if my Atram is older than a few weeks it will very likely have no program left.

When the pieces are laid out on the board the appearance is very impressive. Each side has three airfields, two carriers, five bombers, twenty fighters, five anti-aircraft batteries and five strategic targets to defend. But once you get into the actual mechanics of the game it becomes ludicrous. The computer program keeps track of the amount of fuel and weapons each unit has left, and other aspects of the unit's status. But the inputs required for each unit's movements are incredible; for example, a bombing run over an enemy airfield might require the following input to the computer: 16S4E13R2M1S2F24 ENTER.

The trouble is, that as the game progresses you find yourself having to make this kind of entry for every aircraft, and if that's 15 or more characters the amount of lime it takes to make sure your fingers are correctly positioned doesn't bear thinking about. Of course, if your inputs turn out to be wrong you can find that what you're doing on the board breaks away from what's on the computer, in which case the whole game system becomes unplayable. A 10- move game of Atram can take upwards of five hours to play, and, (randy, I don't think that the enjoyment from the game is at all worthy of that sort of time. It's a shame really, because I like the idea of computer-aided board games, but this is definitely not one to break the mould. I understand that Websters (distributors of Boots' software) put money into this game, in which case you'll probably see it on the shelves at Boots, if nowhere else. It's the kind of game that your Dad would probably buy you for Christmas; if I were you I'd demand the money instead.

I like the idea of computer-aided board games, but this is definitely not one to break the mould.