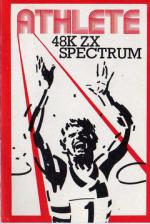 Like Micro Olympics (Database, reviewed this issue), Athlete employs animated figures in the running events. These include the 100m and 400m sprint. the 110m and 400m hurdles. The only other event is the hammer throw. This is seen directly from above with the figure of the thrower as a pair of arms and a head in the circle.

In the running events you compete against two other runners controlled by the computer - this is a single player game. There are two bar codes at the base, one for power and one indicating distance to go. The speed of your runner is key controlled, but judgement is required to ensure you don't run out of power before the race finishes. In the hurdles the jump key is used to get over the obstacles and power is again a factor in winning.

In the hammer throw the character starts to spin and you must judge the right moment, as his speed increases, to loose the hammer. Waiting too long will result in a No Throw. Before each event, which follows on automatically from the other, you may select the skill level from 1 to 10. The hammer throw is interspersed between the other events.

Control keys: 5 or 6/7 and 8 faster/slower. 0 to jump
Joystick: AGF, Protek, Kempston, ZX 2
Keyboard play: responsive, easy to use
Use of colour: not much
Graphics: average to fair, reasonable animation
Sound: very poor to none
Skill levels: 10

'Athlete is a fairly playable game, it has a better running method than Micro Olympics - more practical anyway. The game tends to lack variety and atmosphere, with only running events and a poor hammer throw. I quite like the strategic element whereby energy has to be conserved and used appropriately. Overall, not as good as Micro Olympics but better than many we've seen.'

'The first thing I didn't like about this game was that a ten second delay occurs while a menu and other text is displayed, which happens between each complete game - not very good if you want to get on with the game. I found the game uncompetitive and, if anything, boring to play. The skill levels range from easy to impossible, where you don't stand a chance against computer controlled athletes. Overall, not a very addictive, attractive and playable game. '

'Athlete is a lot better than the spate of running, jumping and standing still games we've seen recently, but it lacks much in the way of events and therefore in playability and addictiveness. The animated running men are quite good although the hammer throw is a bit basic looking. The running is controlled from the keyboard or joystick on a fast, slow, jump basis, which is kinder to the computer than the method employed in Micro Olympics, but it simply isn't as much fun either. I became bored quite quickly with this one.'

I became bored quite quickly with this one. The running is controlled from the keyboard or joystick on a fast, slow, jump basis, but it simply isn't as much fun either.