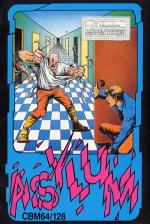 Now for a completely different kettle of fish in the form of Asylum from Screenplay. This was originally a text-based adventure with simple graphic displays that first appeared on the ancient Video Genie and Tandy TRS80. It took place inside a maze-like lunatic asylum from which you must escape.

Now it's been released on the C64 and the only thing that remains unchanged is the theme. Text descriptions, vocabulary and graphics have all been improved - especially, the graphics.

The game starts inside a cell with only a bed, box and television camera for company. Close examination of the box reveals a credit card to be used for unlocking doors.

You move around the maze not by typed commands, but by using the cursor keys. The maze is shown as a 3D into-the-screen view and the walls scroll about convincingly when turning or moving in screen. This isn't quite what I approve of in an adventure game, but there is a fair adventuring aspect to it. Figuring out what to do with the objects found and how to use them, is taxing and tricky work.

About the maze there are doors, objects (usually in boxes), and other inmates. The doors are usually locked and must be unlocked with the correct card before opening them. These doors lead to other cells that occasionally house either an object or its occupant (all quite mad!)

Amongst the objects to be found are an axe, a bird costume (!), a bean bag (!!), and several different types of cards for unlocking doors.

There are a reasonable amount of responses (but nothing outstanding) and the vocabulary is good. There are also some wry humorous touches throughout the game. For instance, I found hacking an electrician to death with the axe proved a successful action, but doing the same thing to a hypochondriac... well, it did give me something of a shock!

I found that this was one game that needed careful attention to mapping in order to get anywhere, as it was easy to get lost in the maze. I found the whole thing quite enjoyable, but for the high import price, and I think this may appeal more to the more arcade-minded amongst you.

The whole thing's quite enjoyable, but may appeal more to the more arcade-minded amongst you.