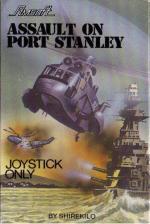 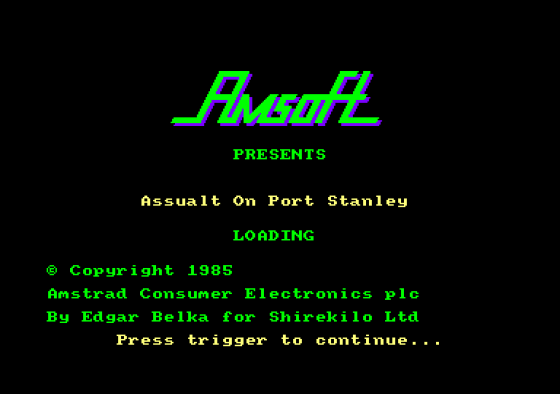 Amsoft must be hoping that the Falklands War will do for this game what it did for the Tory party's standing in the polls. It takes the form of a three stage attack where you control a ship or a helicopter as you try to get to Port Stanley.

The first stage places you in control of a warship as it steams towards the islands. As it slices its way through the exclusion zone it encounters lots of ships intent on blowing it out of the water, making them fair game for your guns. Once the ships are in range, three shells will send a ship to the bottom (along with all hands), only to be replaced by another one. If the enemy get close enough they will shell your vessel and if damage reaches 100 per cent you're so much submerged scrap metal.

When the ships yet close to you they start to circle quite quickly, making them harder to hit and allowing more ships to get within striking range. If you survive long enough and get close enough to the islands - which is purely a matter of time rather than direction - then planes may also appear over the horizon to harass you. You can't shoot these but you can move off screen where they can't shoot you. 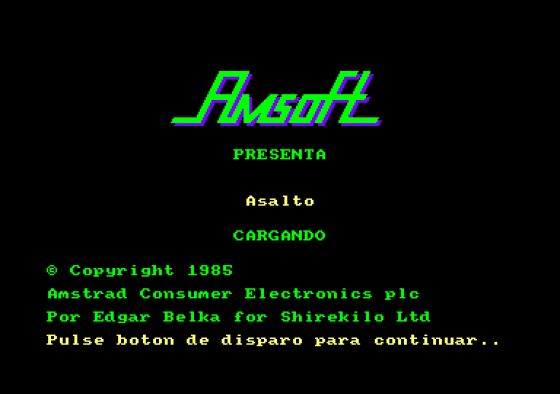 Net long after encountering the planes you reach the island, at which point a helicopter takes off from the ship to challenge the second and third stages of the game. The helicopter may also take off earlier but this will mean it does not have enough fuel to make it to the island. After taking off, the chopper has to take on the waves of enemy fighters surging out to protect their islands.

The planes fly in from the top of the screen while your helicopter flies up from the bottom to meet them. They move down screen, often diagonally, shooting as they go and you have to shoot them down or avoid them. If the chopper gets destroyed, it's back to the ship or to another chopper if the ship had already proceeded far enough. Fuel runs out continually through this stage but if there is enough to survive the onslaught then you move onto a "River Raid" section.

This is again viewed from above. The chopper has to be guided down a scrolling river, avoiding ships and barrage balloons on the way. The screen scrolls downwards and the helicopter can move forward or back on screen as well as left and right. The boats and balloons move left and right across the river and again you either have to shoot them or avoid them.

Fuel continues to run out. To replenish it, the chopper has to be landed at one of the landing stages that appear on the river banks. Fuel and men can be picked up here; the men providing bonus points if you reach the end of the stage. This is the toughest of the three stages as you have to watch both the fuel level and the river traffic ahead of you one slip and it's back to the start of the river.

The utterly tasteless title is not redeemed by the game itself. The first sequence is done much better in Beach Head, while the second two are pale imitations of the old Atari game River Raid. There is virtually nothing in the way of excitement until you get halfway through the final stage!

Neither graphics nor sound are distinguished. Let's hope they come up with something a bit more interesting if they bring us Attack On Goose Green.

P. Good graphics on the third stage.
P. Gets very tough and demands plenty of skill towards the end.
P. No "Argie-bashing" nonsense in the instructions or game.

There is virtually nothing in the way of excitement until you get halfway through the final stage! Neither graphics nor sound are distinguished. 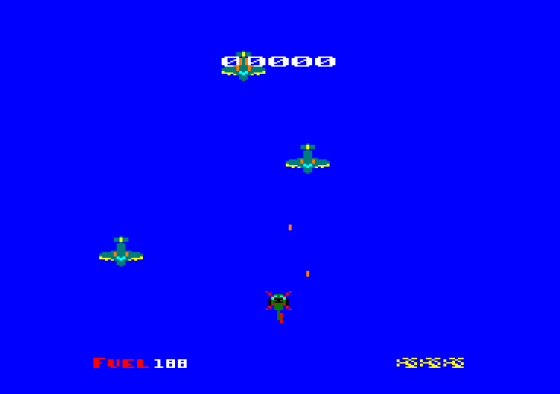 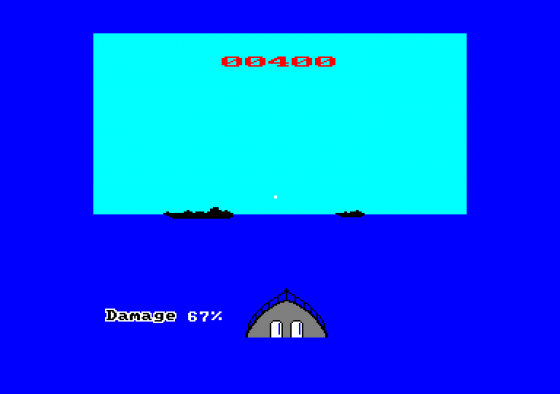