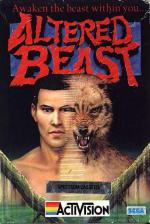 Being dead's no fun, but one thing that can be said for it is you're safe as houses. And it's quiet, like a tomb in fact. So imagine your surprise when you suddenly wake up to find yourself alive and well and not in the usual state of decomposure that you'd expect after spending a few years dead.

Actually it's all down to Zeus who, upon finding his daughter Athena kidnapped by the evil Nelf, opens up his yellowed pages and finds the number of dial a corpse and guess what? He sends a bolt a lightening down and hits your tomb, sending a life giving shock which travels through your head, across your chest, down your leg, across the road and hits a bus stop.

"It's a miracle, I'm cured gov nor an' no mistake" And so the scene is set. You must rescue Athena from the clutches of the evil Nelf who has taken the descendant of the Godsif you succeed she'll probably give you a book token which is not a great deal but if you fail you'll end up dead again. To avoid dying twice in one lifetime, you must negotiate the various levels, the first being the trip to the gateway of the underworld (no it's not a large supermarket) where Nelf is holding Athena. You must punch and kick your way to the portal and when the occasional pulsating beastie appears, kick it's orbs out 'cos the orbs, when collected, power you up and give you extra fighting power. Collect three of theses on a level and kerpow! A startling metamorphosis takes place and transforms you into one of three creatures; a wolf, a bear or a dragon with each one possessing a special fighting ability with which to battle your way onward.

Control is by joystick and keyboard with all the leap up, crouch down, left and right stuff with fire button unleashing a punch or kick and, when you're all powered up with your three orbs and undergone your metamorphosis, it will unleash the supercharged attack, sending all the beasties to their well deserved doom. At the end of the level, Nelf will provide a monstrous guardian who will bar your onward path. Defeating this is tricky, especially if you haven't managed to collect enough power spheres to warrant a change to a meatier disposition.

The Altered Beast Sega coin-op is a fairly wicked affair with some great graphics, especially which is why this conversion seems a little lacking. The graphics are pretty and the backdrops are quite good but the scrolling from left to right is slow and jerky with the attribute clash bordering on the painful.

However the gameplay is there and it's okay so Altered Beasts should look attractive to fans of the coin op, if only because they can save a fortune in 50 pees.

Big licence gets the Activision treatment.

A big licence gets the Activision treatment.